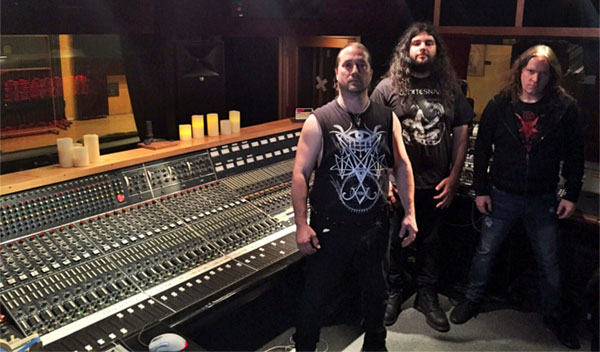 Official press release: Black metal powerhouse Inquisition have begun recording their highly anticipated new album to be released in 2016, a follow up to 2013's critically acclaimed Obscure Verses for the Multiverse. The band are recording at the legendary London Bridge Studios in Seattle (Alice In Chains, Wolves In The Throne Room) with long time engineer Arthur Rizk (Prurient, Magic Circle). Regarding the session, Inquisition guitarist/vocalist Dagon comments, "We are currently in London Bridge Studios here in Seattle recording our upcoming full length. We chose this studio for its rare, vintage console and the world renowned drum room they have. When talking about the console, we are talking about the rare opportunity to track on the infamous Neve 8048. This Neve in particular was made in 1972, and is a vintage board with pre-amps that translate sound into something unmatched; you can use all the plugins you want and still never fully replicate it through emulation. Maybe emulation these days comes close, but can't match a real class vintage board like this. There will be an enormous difference the listeners will be able to appreciate after the album has settled. Inquisition took advantage of this opportunity and is applying it so our fans and supporters can hear the experience of something truly organic by some of the highest standards when it comes to natural environments. Inquisition is a live band, we are remembered for our live sound and we want an album that brings that essence and those dynamics into the album; from the songs to the production in every aspect. Also, we never forget we are a black metal band, to us this means keeping things realistic and this means to never over produce and artificially over polish anything. This is where "vintage" keeps those things in check. Dagon continues, "This time we want to raise the bar on this production so the songs are truly projected as they were intended to, without giving the listener an artificial experience. Organic and vintage on one end, powerful and hot on the other. We are using the room and rare board as a solid foundation to boost this into some much deeper sonic territories compared to past albums so we can preserve the density on the album that Inquisition projects live."