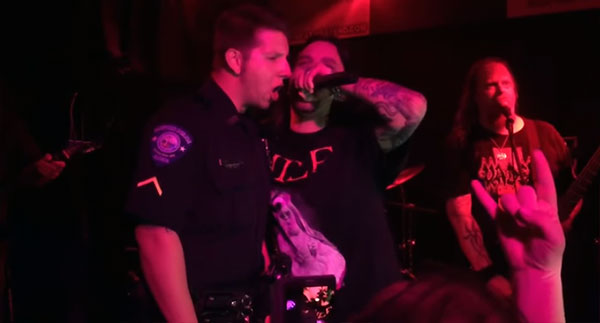 Sanford, Florida police chief Cecil E. Smith says that police officer Andrew Ricks was fired because he had violated other department policies, in addition to recently joining Vital Remains on stage to introduce a song earlier this month. "There is absolutely no concern with us with anyone listening to heavy metal," Smith told The Daily Beast. "That's your prerogative and your choice of music that you want to listen to." "For folks to believe that he was terminated because of the circumstances isn't true," Chief Smith added. "What would have probably happened if Officer Ricks had remained on the job, is that we would have completed the internal investigation, for which he would have most likely received some form of discipline." Among the policies Ricks allegedly violated was his refusal to turn on his body camera while mingling with community contacts, and putting a training officer in a situation that he wasn't "equipped to handle." For his part, Ricks has declined to comment on the matter, saying only that he resigned in good standing prior to the Vital Remains show.