The Ghost Inside frontman Jonathan Vigil was allegedly "jumped" last night in Reno, Nevada, prompting the band to cancel their scheduled show, the second stop of their "Locals Only" tour. 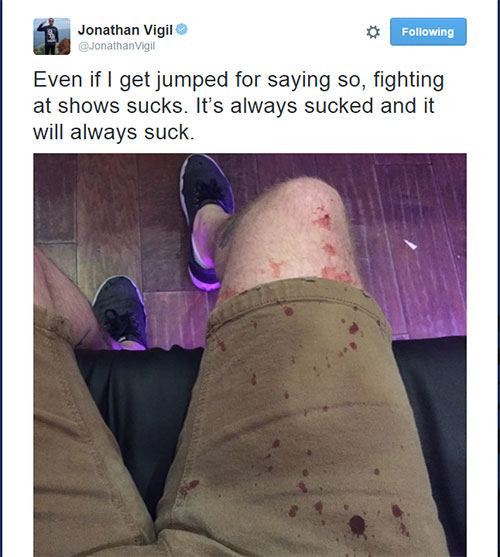 While Vigil wasn't specific about the "saying so" portion, it's believed that he's referring to a Tweet he issued in March:

Fighting at shows sucks. It has always sucked and it will forever suck. Just stop

Vigil then went on to reiterate his original point:

Saying this AGAIN, and not specific to any one city or any one person. Stop fighting at shows, it sucks for everyone.

Interestingly, an hour after Vigil said he was jumped, Terror guitarist Martin Stewart had this to say:

"jumped" in '15 usually means "I got beat up but cant bear 4 the internet community that I'm seeking attention from 2 know that". USUALLY.

Stewart obviously didn't mention Vigil, but the timing is suspect, given the fact that Terror has expressed their dislike for The Ghost Inside in the past. UPDATE: Vigil has now issued the following statement to Alternative Press:
"I posted about the incident because I stand for what I believe in. What I believe, and I feel like any sensible person would believe as well, is that fighting at shows is terrible and doesn't belong. "I did not post about the incident to out anybody, to start drama, to get sympathy online, to get some kind of revenge or anything like that. I posted about it because this is a real thing that happens to people at shows (show goers and bands alike) who are only trying to make things better and that kind of reaction is sad and depressing for everyone. "I understand that metal and hardcore music is aggressive in its nature. I know that people come from all different backgrounds. I know that some people have it harder than others. I know people have vastly different opinions. I know that people hate. But this scene is an outlet for everyone involved to deal with the problems in their lives. Whether it's the lyrics and singing along to them live, getting away from home and spending time at a show getting sweaty with friends, being on stage and letting it all go or even if it's getting out some of that aggression in the pit, you leave the show better than you entered it. That's what it's always been for me. On either side of the stage, on or off. When fighting is involved with that, it destroys scenes. It shuts down venues. People get hurt. It deters new people from wanting to get into it. It makes people SCARED to go see a show. That's unacceptable. "I'm 31 years old. The truth is there's plenty of things I could be (and probably should be) doing with my life but I choose to do this. I am a face, I am a voice and I am a part of this scene. I will always use my platform to speak about things I believe in. To write about tragedy and injustice and how to push through it. I will always preach positive. "I'll end this now with what started this whole thing in the first place… "'Fighting at shows sucks. It has always sucked and it will forever suck. Just stop'"