Danzig and security allegedly beat up fan for taking photo

It's well known that Glenn Danzig doesn't like being photographed. With that in mind, an individual named Neil Dalton claims that he was assaulted by Danzig and his security last night for taking a photograph. Here's what Mr. Dalton alleges took place:
"So I went to Danzig last night. Including the 100 dollars I spent on his merch plus the tickets time of work and traveling to Montreal to see him this is the price you pay for taking a photo of Danzig. He called me up on stage got got his pussy security guards to rough me up and held me back me back so he could hit me himself. Cops can't do fuck all because we're both not Canadian and they did it off camera and said I fell .could all my friends please share this because I want the world to know what a pussy the guy is.superjoint fucking ruled tho." 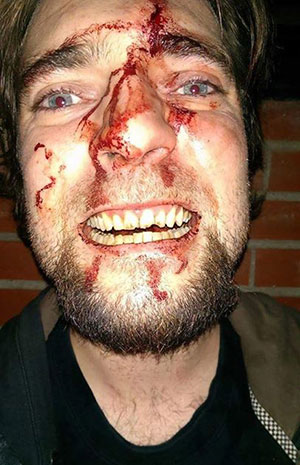 UPDATE: Dalton has now issued this follow-up statement:
Holy shit, I didn't expect this Danzig incident to go so viral and to get so much support. I am so grateful to all the people asking am I ok and sharing it. My Facebook is blowing up and understandably. Firstly I do want to clarify a few things that have become a concern for some people. I was taking a few photos that night, I wasn't filming as Danzig said. And I am not a professional/amateur photographer (I believe this was a misprint), and I was using my own phone to take the pictures. Also with my previous post I can see how it seemed to jump away from the witness statements, When I originally posted, He called me up on stage and his security guards dragged me off, It was 2 separate incidents I was referring to. 1.) Danzig did call me out while he was on stage and said he would 'break my fucking neck' 2.) When I was dragged off it wasn't through or up on stage, I was not on stage at all that night. They dragged me out the back way. When I was brought out the side by security and got a beat down by two of his security guards. I returned back to the venue because thats where my friends where and was in disbelief of what happened, got spotted and brought out the side again for the same treatment but this time Danzig himself came out himself to punch and kick me. There are police reports and paramedic reports to verify all this and a few have messaged me saying they witnessed it. With the internet I already know I'm going to get you deserved it, you're a pussy, I bet you where being a drunk dick trolling bullshit but really don't bother. Anyone that knows me knows I'm a huge metal fan, have spent hundreds and thousands over the years to see and support what I love. I own every Misfits/Danzig record out there and travelled 6 hours to see this show and had no intentions for this to happen and I wish it didn't I have a fucking Misfits tattoo for fuck sake so why would I lie or make this shit up. I live and breath metal. I'm not looking for my 5 minutes of fame and I'm not looking for a pay day. Point of all this is, I was a huge fan of Danzig, And as most people know this kind of incident has happened before with Danzig and honestly it's not right and people need to know what he's like to his fans who got him to where he is. Feel free to share this.Thanks again to everyone who's supporting me with this it means so much.