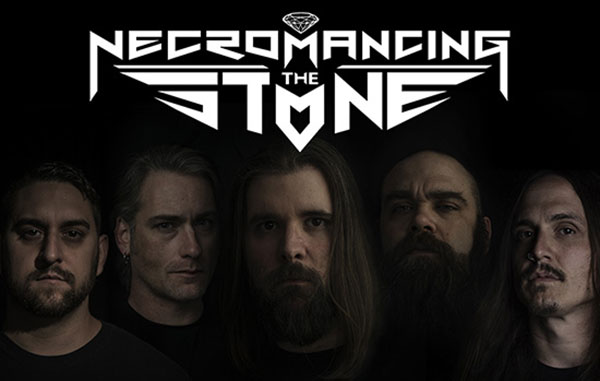 Official press release: Metal Blade Records is proud to announce the signing of Necromancing the Stone. Featuring former and current members of Arsis, The Absence, The Black Dahlia Murder, and Brimstone Coven, Necromancing the Stone may be considered a "supergroup" or "studio project" by some, but that is not the intent of this quintet. Upon unleashing their upcoming debut full-length in 2016 via Metal Blade, the band plans to take their unique brand of no-nonsense, traditional heavy metal out on the road. Necromancing the Stone's Jeramie Kling (drums) comments: "It's an honor to be a part of the Metal Blade family. Together, we have crafted a release that will not only destroy an entire seaboard village by way of force, but also soothe that very hoard into a capricious trance. We have finalized the recording process and have sent our offering to the mighty James Murphy. Cannot wait to get this released and see all of you maniacs out there on the road!" Justin Wood (guitars) adds: "Necromancing the Stone is something that we are all excited to be a part of as it gives us a creative outlet to create the kind of hook laden, riff-centric heavy metal that we want to hear more of in the world. Justin Wood and John Williams (Brimstone Coven), along with James Malone (Arsis), Ryan Williams (ex-The Black Dahlia Murder), and Jeramie Kling (The Absence, 456 other bands) swore their solemn allegiance to the cause with a blood sacrifice upon the peak of Ogre's Rock in a secret ritual veiled in danger and mystery in the summer of 2014 and came together for the recording of an online EP 'Before The Devil Knows You Are Dead'. The time has now come to batten down the hatches and set forth into the world with a purpose in our hearts and a sword in our hands. We aim to leave no stone unturned and hope to see you all out there with us blazing a path of blood and riffs." For a preview of what's to come, fans can stream and purchase Necromancing the Stone's 3-track EP, Before The Devil Knows You Are Dead, now on Bandcamp. Released in summer 2014 and mixed by Peter Tagtgren (Hypocrisy, Pain, etc.), Before The Devil Knows You Are Dead will be re-recorded and included on the band's currently untitled album. Stay tuned for more news about this release coming soon. Necromancing the Stone line-up: "Big" John Williams - vocals James Malone - guitars Justin Wood - guitars Ryan Williams - bass Jeramie Kling - drums