See You Next Tuesday back together 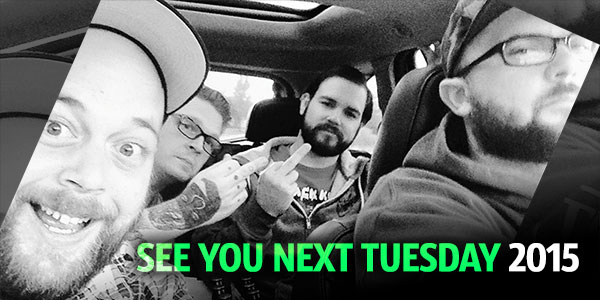 Michigan deathcore outfit See You Next Tuesday has reformed roughly six years after calling it quits. Formed in 2004, SYNT disbanded in 2009 after releasing two albums with Ferret Music. The band has issued the following statement:
"Well I suppose this can be considered our 'official statement'. All four of us sat down last night over tacos and beers to discuss what to do from here. The reunion set at Don't Call It A Fest was only meant to be a one time thing. What we didn't expect was to have as much fun as we did. And we didn't expect all the support that we received. Everyone from our past came out of the woodwork and it was a taste of a life we used to live that we all missed. "So since we all had such a great time discovering something we all had forgotten, and after taking all the time to relearn the majority of our songs, we have decided to keep going and stay together. "As far as future plans, we pretty much are just going to go with the flow. We all have grown up lives now outside of the band, so it can't be put first like we used to. We talked about writing and possibly putting something out. Nothing set in stone as of yet. We are open to playing shows when we all have time to do so. Definitely no extensive touring. But we would be open to small couple day runs if real life permits. "So in short, we are back. Hopefully have some new stuff for you to listen to in the next year or so and maybe some shows. Thanks a lot from all of us!"

Tags: See You Next Tuesday