Sound and Fury Festival to return in 2016?

The first Sound and Fury Festival took place in 2006, and then each year thereafter until the 2013 installment was abruptly cancelled. Radio silence ensued. Fast forward more than two years and it appears that the California hardcore festival just might be returning in 2016. Yesterday promoter (and Backtrack frontman) James Vitalo uploaded a photo which shows a completed rental application for the Earl Warren Showgrounds in Santa Barbara, CA, and the event name is listed as "Sound and Fury Festival." If the application is to be believed, the festival will take place on July 1, 2, and 3. You can see the photo below. The Earl Warren Showgrounds is the same venue at which most of the previous Sound and Fury events took place. It was also site of the one of the most infamous hardcore mosh pit incidents ever, when someone rode a motorcycle right into the middle of the pit (coincidentally, during a set by Backtrack). 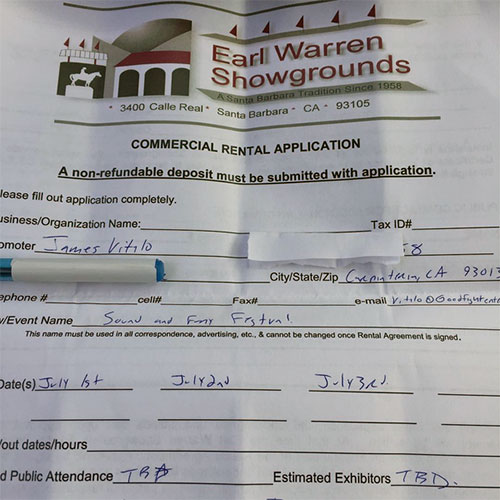