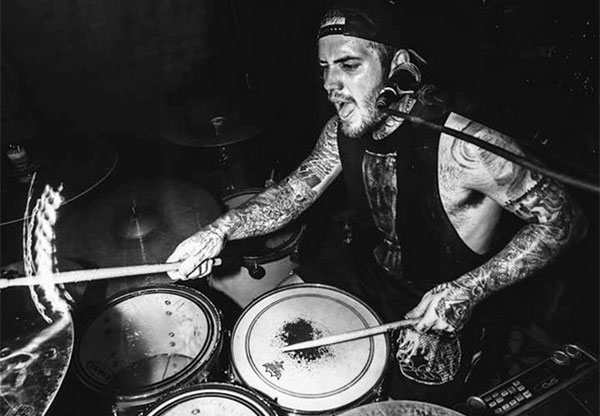 photo by Randy Edwards
Last night King Conquer was in Marietta, GA to perform at Swayze's with Adaliah, Here Comes the Kraken et al. During Adaliah's set, King Conquer drummer Chris Whited was in the pit when he was knocked out and allegedly attacked further as he lay unconscious. Whited was taken via ambulance to a local hospital and has since been released. We received the following account from a Lambgoat reader:
"King Conquer's drummer was knocked out at last nights show and kicked in the face repeatedly. Police and ambulance were involved and he was taken to the hospital. The police talked to the kid that did it and just let him go, and then proceeded to tell the touring package 'no wonder your friend got knocked out' when they were called out for doing nothing. This all happened at Swayzes Venue in Marietta, GA."
Whited himself has now offered up the following:
"So I moshed last night for Adaliah' last song because it was their last day with us, and some pussy got butthurt and scooped me up from behind and slammed my face on the concrete (which knocked me out) then four other pussy ass f*ggots decided to kick me in the face while I was on the ground already knocked out, and then none of them would fight anyone one on one. And then they all lied to the cops about what happened. Long story short, I woke up in the hospital with no clue about anything that happened. Crazy, that's never happened to me before."