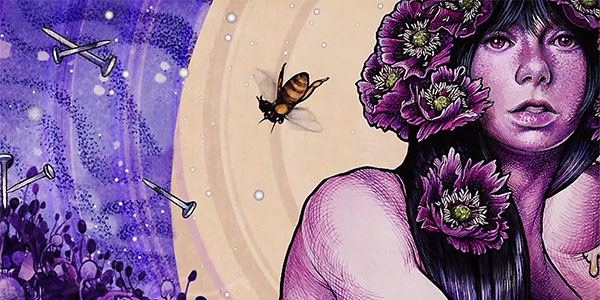 Official press release: Baroness return with their first new music in three years, as the band releases their fourth album, Purple, on December 18 via their recently formed label, Abraxan Hymns. The first song from the ten-track album, "Chlorine & Wine," is available now, with an animated clip featuring "Chlorine & Wine" artwork viewable below. "After releasing a lengthy and investigative record like Yellow & Green we all felt that we needed to make something much more direct and immediate," explains band founder and singer John Baizley of the approach behind Purple. The album was produced by Dave Fridmann (The Flaming Lips, MGMT) at Tarbox Road Studios in the secluded town of Cassadaga, New York. "We wanted to write with our normal focus on artistry, balanced against an increased level of energy and focus. It was important for us to write our new songs with the type of enthusiasm and expressiveness that could act as a counterpoint to the album's dark themes. As a result, the music came out in an intense, heavy and sonically captivating in a new way, which was important, loathe, as we are to fall into any kind of complacency pitfall or formulaic songwriting routine. Purple is the most fully realized representation of our intention as a band; considering the amount of physical and mental energy spent writing it, we have accomplished something which would have seemed impossible to us a couple of years ago." In late July, Baroness shared news that the release would come via their own label, dubbed Abraxan Hymns. Baizley discusses the band's move towards independence: "We have been incredibly fortunate to work with a series of amazing labels, producers, management, crew members, etc., all of whom we not only consider a critical part of our development as musicians and performers but also our personal friends. After working for so long as a recording and touring band, it seemed like a no-brainer when the opportunity arose to start our own label." Pre-order packages for Purple, which feature an instant download of "Chlorine & Wine" as well as a limited edition colored vinyl version of the new album, two picture discs, t-shirts and other unique items, are available now. Purple track list: 01. Morningstar 02. Shock Me 03. Try to Disappear 04. Kerosene 05. Fugue 06. Chlorine & Wine 07. The Iron Bell 08. Desperation Burns 09. If I Have to Wake Up (Would You Stop the Rain) 10. Crossroads of Infinity