Upon A Burning Body singer 'ass kicked' by female 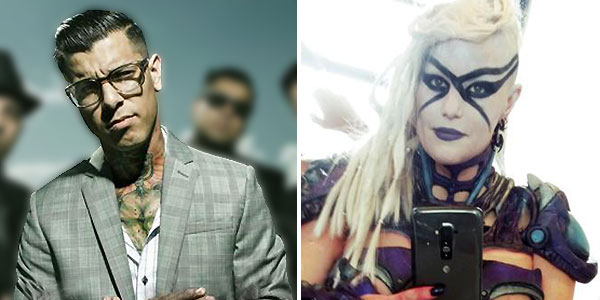 Lambgoat has confirmed that there was an altercation of sorts yesterday at the Heavy Montreal festival in Quebec, Canada involving Upon A Burning Body frontman Danny Leal and former Gwar frontwoman, Vulvatron, who also used to be a professional wrestler. This morning someone sent us a screenshot of a post she made on Facebook, though not available to the public. Here you go: 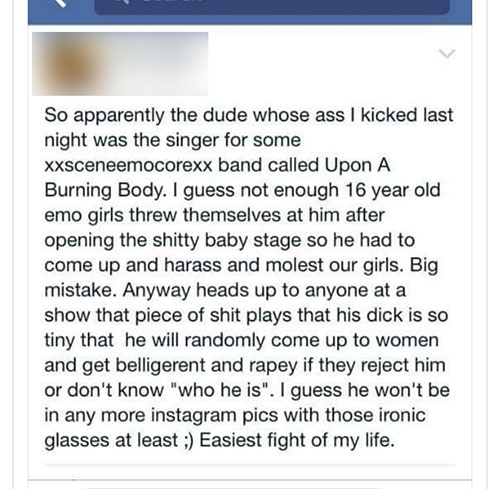 We subsequently reached out to Vulvatron for additional information and she told us this:
"My message is don't come up and grab strange women's asses randomly and then when they push you off say 'fuck you whores, I fuck better women every day'... and then not expect someone to act defensively. Security was nowhere to be found so I thought it would be best to put him in a restraint til they did. I hit him in the glasses with my beer then got a chokehold on in 10 seconds. Threw him out of our area and said don't treat women like that you entitled dick. He came back with 5 of his friends (I wonder what he told his posse that he needed backup for...) and we had gotten security by then. He was still mouthing off about wanting to hit 'whores' so they escorted him out and he said, 'Don't you know who I am? I'm a performer.'"
Vulvatron also made us aware of a graphic that someone shared with her: 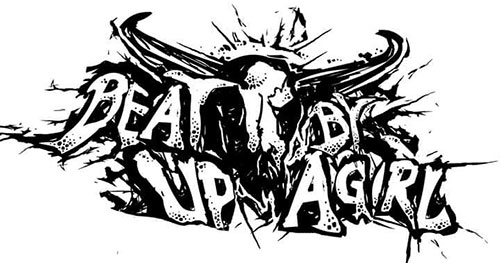 UPDATE: A man named Kevin Joel purportedly witnessed the altercation and posted the following account on our Facebook page:
You reached out to the lady but didn't reach out to anybody else there? Seems one sided to me. Here's what I saw, standing 2 feet away from the "incident." This lady and her friends were being belligerent and clearly intoxicated. Some of them did not even have the right wristbands and were not supposed to be in this area. Danny asked one of them where the bathrooms were and her friend gave a sarcastic and rude answer, so Danny cracked some jokes back. Kim then comes and takes a swing at someone who was not suspecting it...he didn't get hurt, he didnt get beat, and he didnt hit back, and there was no "fight". The whole incident happened in literally 30 seconds in a very public place with security right nearby. The entire time the boys in UABB remained calm and collected, while this lady and her friends laughed about it and told their friends how they were going to fuck them over and they couldn't do anything back because they were girls. The band hasn't addressed it because its such a dumb non-issue that was dealt with and is now being over dramatized. UABB are the most humble, hard working, and respectful people I've ever been around in the music industry, and its crazy to witness such blatant lies and misinformation being spread. I had my camera with me at the time but chose not to film the incident because I'm not in the business of celebrity gossip and these girls were just causing a scene..but then she started lying to security, laughing with her friends about it, and being unprofessional, so I snapped some photos/vids of it and also of Danny talking about it after - again, where he was calm and collected. I turned that over to the band, but I don't think there's any need for them to address this sensationalized and bullshit story. I'm just speaking up because it's not fair to witness this misinformation and hate coming from people 2000 miles away.