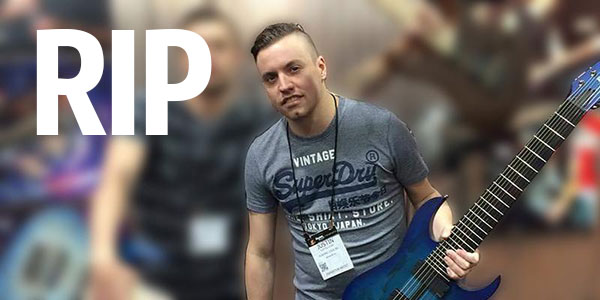 Well, our worst fears have been confirmed as After The Burial guitar player Justin Lowe has passed away in Wisconsin. Lowe was reported missing on July 18 in Washington County, MN. His disappearance came just weeks after he issued a troubling statement, followed shortly by word from After The Burial that Lowe was mentally ill, though receiving treatment. Lowe's body was found by a hiker Tuesday evening beneath the Arcola High Bridge near Somerset, Wisconsin. His vehicle had been found in a parking lot nearby in Minnesota. Authorities state that the cause of death is consistent with a fall. Additional information can be found here. Lowe was 32-years-old. Our condolences go out to his family and friends. UPDATE: Justin Lowe's sister, Shannon, has posted the following via Facebook:
Justin was a gifted musician, music producer and photographer. He was also a loving son, brother, uncle, and friend to many in the music community. The world lost an amazing talent. He touched many lives. He was receiving professional help and we thought he was making progress. We are devastated and heartbroken at his passing. We will miss him forever. Please respect our request for privacy as we try to cope with this tragedy. I will be logging off Facebook for a period of time to allow myself to grieve with my family. Thank you again for everyone's thoughts, prayers, and concerns. To those of you who have asked about a funeral service: my family has chosen a private grave-side service and will not be holding a public funeral.