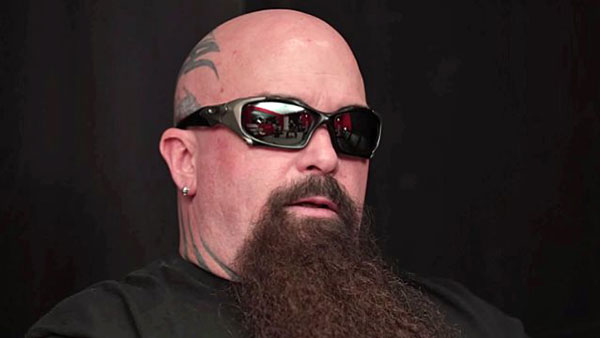 A few days after taking Mayhem Festival co-founder Kevin Lyman to task for saying that "metal got gray, bald and fat," Slayer guitarist Kerry King had a few less than flattering things to say about organizers of Mayhem Festival 2015. In an interview with Metal Insider conducted on Sunday in Hartford, Connecticut, King says that "whoever booked [Mayhem] made a gigantic error":
"Do I know this tour wasn't booked correctly? Absolutely I know this tour wasn't booked correctly. Gary Holt made the comment that usually there's the Main Stage, a second stage, a third stage, and then that piece of shit record stage…now what they're calling a second stage is at best a fourth stage and they're wondering why people aren't showing up. I think they waited too long and think all the talent that could have been on this took gigs in Europe. Because there's nobody here touring. It's easy to fill these stages but I guess they wanted a different price point, take away the second and third stage which I think had a lot of value. To me a second stage headliner is Anthrax, Machine Head…Whoever booked this made a gigantic error."
Metal Insider then asked King if he felt that Slayer were in the unfortunate position of having to carry the show:
"It's basically a glorified Slayer show. Let me put it to you this way, last year Slayer, Suicidal [Tendencies], and Exodus played the Eagles Ballroom in Milwaukee and sold it out. Mayhem came through 10 days ago and didn't sell it out. That's what I'm going up against here."
King wasn't done. He added, "I understand it from a fan's perspective. I wouldn't spend money to come to this either." When asked if this will be Slayer's last appearance on the Mayhem Fest, King said, "This might be the last time you see Mayhem."