Mon, July 20, 2015 7:48 AM PT50,801 views
You may recall the little dustup that Attila frontman Chris Fronzak and Senses Fail vocalist Buddy Nielsen had last fall over Attila's lyrics, which Nielsen called homophobic. Fast forward to this weekend, and it looks like the two still aren't particularly fond of one another. Interestingly, both bands are currently touring together as part of Warped Tour 2015, and their proximity is beginning to cause problems. Without naming Senses Fail, on Saturday Fronzak accused a "bitch ass band" of leaving a sign at the Attila merch table calling them "homophobes":
"OMFG SOME OF THE BANDS ON WARPED ARE FUCKING COWARDS. IM NOT GONNA TAG ANYONE BECAUSE THE COWARD BANDS ARE SMALL AS FUCK BUT SERIOUSLY… IF YOUR BITCH ASS BAND IS GONNA LEAVE A SIGN AT OUR MERCH CALLING US 'HOMOPHOBES' THEN SAY IT TO MY FACE…. BUNCH OF FUCKING COWARDS BUNCH OF FUCKING NOBODIES TRYINA THROW SHADE TO GAIN SOME FUCKING FAME. FUCK A PUSSY ASS COWARD. SAY SHIT TO MY FUCKING FACE. IM NOT A FUCKING BITCH IF I HAVE A PROBLEM WITH SOMEONE I KNOCK ON THEIR BUS DOOR AND SAY IT TO THEIR FACE. FUCKING BOOHOO ASS BITCHES."
A day later, Fronzak was back on Twitter venting after Nielsen and Senses Fail had a few less than flattering things to say about Attila during their set:

Nielsen responded with this: 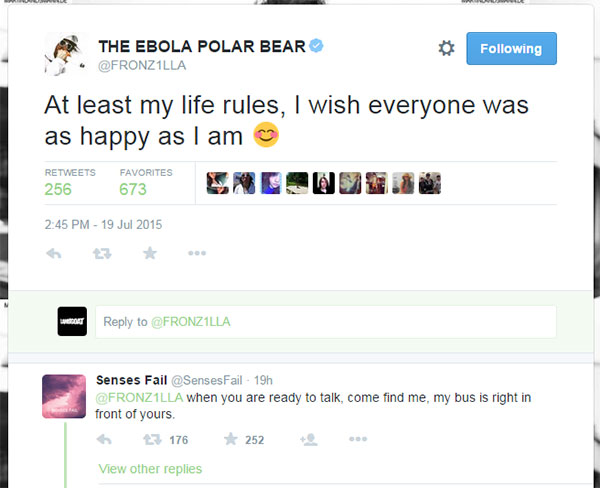 Tomorrow's Warped Tour stop in Scranton, Pennsylvania may or may not result in an altercation.