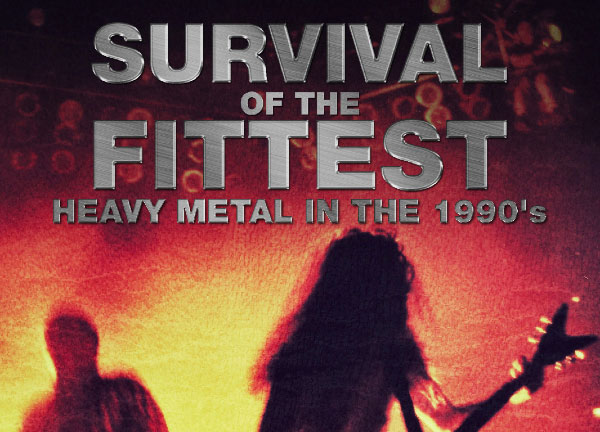 Official press release: Since its inception in the late 1960's, heavy metal has experienced quite a few ups and downs in popularity. But there was one specific decade that sticks out as the most troubling - the 1990's. In what seemed like one fell swoop, a style of metal that had been popular for much of the 1980's was rendered obsolete, and in its place, was a much more real, raw, and unique approach - detected in several new metal-based "sub-genres." Add to it several changes in the music industry and media, and it appeared as if traditional metal may have met its expiration date…before several bands (and a certain traveling festival tour) helped put headbanging rock back on track. Written by journalist/author Greg Prato, 'Survival of the Fittest: Heavy Metal in the 1990's' is the first book to focus entirely on this decade. Set in an oral history format, 'Survival' features over 80 interviews conducted exclusively for this book, including current or past members of Pantera, Sepultura, Fear Factory, Judas Priest, Iron Maiden, Kiss, Def Leppard, Guns N' Roses, Slayer, Megadeth, Anthrax, Exodus, Testament, Dream Theater, King's X, Extreme, Winger, Cinderella, Living Colour, Faith No More, Primus, Nirvana, Nine Inch Nails, White Zombie, Stone Temple Pilots, Kyuss, Danzig, Clutch, Life of Agony, Biohazard, Type O Negative, Within Temptation, Cradle of Filth, Death, Coal Chamber, and System of a Down (among many others), as well as Eddie Trunk, Riki Rachtman, and Lonn Friend. Also featured is a foreword penned by Pantera bassist Rex Brown. Greg Prato is a Long Island, New York-based journalist, who has written for Rolling Stone and Guitar Player, and has authored such books as 'Iron Maiden: '80 '81,' 'The Faith No More & Mr. Bungle Companion,' 'The Eric Carr Story,' and 'Grunge is Dead: The Oral History of Seattle Rock Music.' 'Survival of the Fittest' is his 16th book overall. Available as a paperback version [616 pages, $24.99], a Kindle download [$9.99], and a Nook download [$9.99], 'Survival of the Fittest' helps put the '90s and heavy metal all into perspective. Read an exclusive excerpt here: www.songfacts.com/blog/writing/survival_of_the_fittest_heavy_metal_in_the_1990_s Ordering info here: Paperback and Kindle

fck this fck this book fcker...

a NYC writer making a book about our seattle music scene. makes sense.

is that really the cover? with the possessive on the decade?

Try touring in the late 2000's, not getting guarantee money every night because your booking agent is robbing you nightly because he is addicted to Filipino boy hookers, and trying to get from show to show when gas is 4 bucks a gallon. Fu ck this book, the 90s were a cake walk financially, My band was swallowed up by a major label. Woe of Tyrants would have been a household name if our label matched our work ethic. Write a book about us, we have tons more poop stories, including diarrhea

I wouldn't consider any of the bands named above to be 'the fittest', most aren't even metal. Talk to bands that made great music and created a fan base despite the 90's music scene.

There really was no thought put into that cover.

Way to exclude the thriving death metal scene of the 1990s. What a douche this "author" must be.

What the actual fck is this shit that keeps going on about the 90's metal scene being a hard time??? Yeah because Pantera, Machine Head, Deftones, Metallica, Megadeth, Anthrax, Sepultura, Fear Factory, Skid Row....to name a few, all had a terrible 90's huh?? fcking huge time for metal!!

Just because the author had a troubling experience through puberty doesn't mean the bands he listened to during that time were troubled. Two different mutually exclusive situations, idiot

Written by a college kid studying the scene and what it meant while the rest of us were at the shows getting our noses broken. Anyway, I don't know how to read.