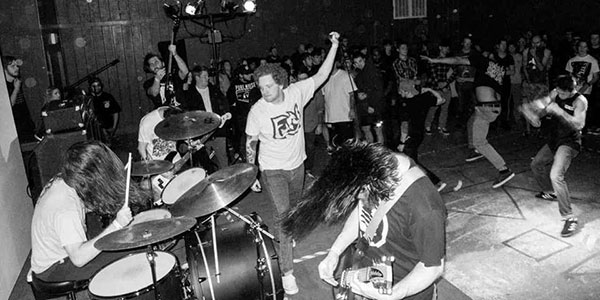 Official press release: Good Fight Music welcomes Axis to its family. The label will release debut full-length Show Your Greed on September 4th. Right at home on the Good Fight roster amongst bands like Old Wounds and Hollow Earth, Orlando, Florida's Axis is another young band that's been absolutely killing it in the DIY hardcore scene. Founded in 2010, Axis has toured hard with the likes of Bane, Blistered, and Eternal Sleep, and has released an EP and two splits – the latter with Self Defense Family, on Harm Reduction Records, the label co-owned by SDF frontman Patrick Kindlon and Code Orange drummer Jami Morgan. Debut full-length Show Your Greed, set for a September 4th release on Good Fight, was recorded by the band, mixed by producer Taylor Young (of Nails and Twitching Tongues), and mastered by Brad Boatright (Noisem, Full of Hell). Show Your Greed, Axis takes the full-throttle beating of Turmoil and Buried Alive and laces it with the gloom of Kiss It Goodbye or All Else Failed. It is a shockingly powerful debut album, relentless and machine-like from start to finish, showing a young band hone its reverence of the past into a new, deadly thing. Check out "Transgression," a track off Show Your Greed, and get the vibe, here:

this was supposed to come out on MayFly records, now I guess it's on Good Fight..love their split w/ SDF, this new track smokes as well.

Holy smokes this is meaty!

Reminds me of Norma Jean

This band stayed at my friends house. They ran a train on his mom, got goo on her GOOD hand towels and ate the last box of bran flakes. Shitty dudes, do not back.

Literally the best band in hardcore. Not sure when Good Fight decided to become awesome, but I support.

Most ungrateful band in hardcore. Please kill yourselves.

^ ditto man they eat too much Taco Bell and deprive the rest of the world. Kill'em ALL!

I lol'd at the bran flakes comment. If i had known your grandmother had embroidered those towels i would have never...

Sounds like Sepultura ate Justin Bieber then threw up Rush... I actually didnt listen to it, some of us are still at work... ICP fo lyfe

man i wish their corn was for sale at their shows

This makes my mother c-m

No Josh no care.

I remember when Advent did it better and no one cared until they were gone.

Advent did it better than anyone. period.

^shut the fck up

FRONZ HERE. THESE DUDES SUCK THEEZ NUTS BOY. THEY REALLY NEED TO BE OPENING SUPPORT FOR MY FRONZILLA TOUR TO SUPPORT MY NEW RAP ALBUM. THE BEATS WERE RECORDED WITH ACTUAL TRACKINGS OF BEAU BOKENS DIARRHEA. JUST BUILT A HOUSE IN JAPAN PCE gayS