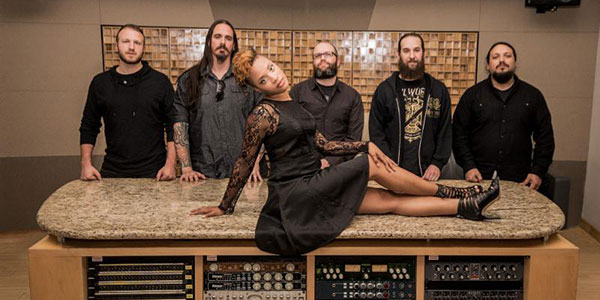 Official press release: Century Media Records is pleased to announce the signing of Houston progressive metallers Oceans of Slumber. Founded in 2011, Oceans of Slumber mystify listeners with atmospheric melodies over darkened dynamics that range from the perversely sinister to the adventurously progressive. Creating an undeniably epic wall of sound that has become the Texans' trademark, Oceans of Slumber caught the attention of the world's largest heavy metal label and will release their Blue EP on limited edition vinyl August 21st, 2015. On the Blue EP, listeners are treated to re-imaginings of classics from seminal artists such as Candlemass, Led Zeppelin, Emperor and Pink Floyd. The EP also includes a re-working of a previously released Oceans of Slumber track as well as a taste of a brand new single that will appear on the forthcoming full length album, to be released by Century Media, date and title TBA. Jens Prueter, Head Of A&R Century Media Records Europe comments: "Being part of the Metal scene for so many years it's hard to surprise me with anything but I couldn't believe what I heard when my colleague Daniel Dismal sent me the new Oceans of Slumber recordings. Here's a young band, combining the best of Texas' heritage from both Metal and Alternative Progressive bands such as Watchtower, King's X, Mars Volta, Trail Of Dead and going way back to the roots of Big Mama Thornton and her disciple, Janis Joplin. These highly skilled musicians made a huge step with the addition of the young, soulful voice of Cammie Gilbert and I'm sure you will be just as surprised when you hear the upcoming album! The Blue EP is just the beginning from Oceans of Slumber on Century Media and I am sure they'll be surprising us all every step of the way." "One of the many things that drew me into the Metal and Punk genre when I was coming up through the scene in the late 80's / early 90's was the overall passion you could hear and feel in the music. When I first popped in the new Oceans of Slumber album I was floored. Here was something that not only took me back to my youth but continued to take me on an emotional journey throughout the entire record. I am honestly honored to be able to work with this up and coming act and I am excited to be part of their promising future! The Blue EP is just a taste my friends, not only a showcase of the bands' musical prowess but also a look into what the full length will bring to the world of Metal and music itself," states Daniel Dismal. The alliance of Oceans of Slumber with Century Media Records marks the genesis of many great achievements in the future for this rising act. Oceans of Slumber drummer Dobber Beverly elaborates, "We are beyond excited to begin the next chapter of Oceans of Slumber with Century Media. Being a part of a label that shares our vision and is equally as daring is a perfect match for us and we couldn't have dreamed of a better pairing. We've finally found our home." Watch Oceans of Slumber cover "Solitude" by Candlemass: