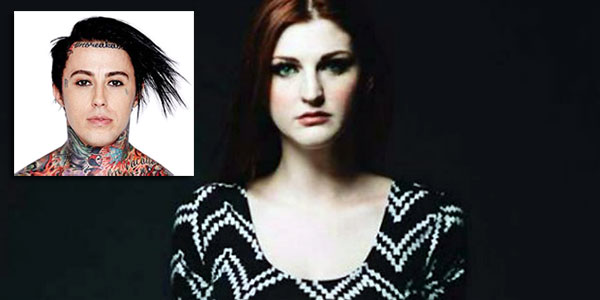 Katelynd "Kacee" Boswell, the woman who alleges that she was sexually assaulted by Falling In Reverse singer Ronnie Radke last week in Utah, has now conducted an interview with Alternative Press. A few excerpts from the conversation can be found below:
Can you walk us through the events of that night? There's a lot of conflicting information out there. Levi's post, the NY Daily News, Ronnie's statement... KACEE BOSWELL: Ronnie's statement is a direct conflict with what the witness had to say to law enforcement. He doesn't want to do any press. But I can tell you what he said to them. You don't have to be any more explicit than you're comfortable with, but since I'm talking to you, I'd like to hear what happened [from you]. You both acknowledge you had some kind of prior relationship in the past. Ronnie actually told the witness that he had never met me before in his life. The witness saw Ronnie leave me on the side of the road and came over to me. Then Ronnie and [his bodyguard] came back. The witness was like, "What's going on?" And they were just like, "We don't know this girl. She was acting crazy. We didn't know what to do. She was going to come to the bar with us. But, like, she told us where she lived and we didn't really know where she lived so we just dropped her here." The witness was like, "OK, well, have you guys called the cops?" And they said, "Yes." Then Ronnie started yelling at me, and said, "You have no idea how much trouble you've gotten me into, Kacee." Then they got in the car and sped off again. So we waited on the curb for the police to show up. They didn't. Finally this police car drove by and the witness flagged it down. [The cops said] "We have no record of anyone calling the police." That police officer stayed and called the police for us. That's when EMS came and took me to the hospital. [In a text message, the witness told AP he saw "three gentlemen leaving her on the side of the road, extremely disoriented and intoxicated," noting, "I did believe Ronnie's story and allowed them to leave the scene before the police arrived." – Ed.] You came to the show to see the band and because you knew Ronnie, right? Yeah. He gave me two backstage passes. I still have the other one. He texted me [inviting me to the show] and I was like, "Oh, yeah, just send me some passes." I have no shortage of girlfriends who are huge fans of his, but I ended up going by myself. I read something alleging Ronnie's bodyguard assaulted you during the show. I didn't say that. ... Did the alleged assault take place in the bus or in the Uber? [Sighs]. On the bus. You have stated today, for the record, that you never said it was a gang rape. But you are saying it was Ronnie and his bodyguard, or it was just Ronnie? It was Ronnie. I think a comment that I left on my Facebook got misconstrued. I can't remember exactly what it was... I said something along the lines of, "his bodyguard too" [with a] sad face. I should have been more descriptive, like, "He was there." ... You said you aren't out for money. Is the goal here, from a legal standpoint, to press criminal charges, if/when there's sufficient evidence? Well, absolutely, when there's more evidence. But the goal here is also to go after cyberbullies. There are hundreds of comments and messages that are just terrifying. I've gotten phone calls that are terrifying. I would like to go after cyberbullies as much as possible, because, I'm scared. His fanbase is a bunch of really fervent [teenage] boys who'd do anything for their idol. I feel like my life is in danger. Virtual harassment is a huge epidemic in our country and it does sometimes push people to suicide. Not that I have any suicidal thoughts but I'm definitely in a dark place. I haven't felt this sad in a really long time. Complete strangers are telling me I'm too ugly to be raped. It's terrible.
You can read the full interview here.