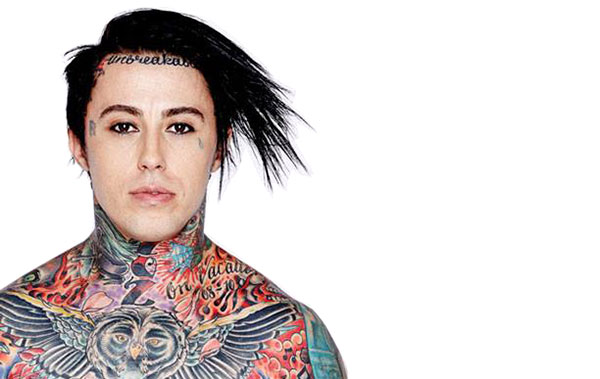 Yesterday a woman named Kacee Boswell took to Facebook to accuse Falling In Reverse frontman Ronnie Radke and some of his associates of sexual assaulting her following the band's June 3rd show in Murray, UT. Here's what Boswell originally had to say:
"I've been a victim of sexual assault too many times. Once is too many. Four times is too many for any person. Please pray for me "Broken nose (previous to assault) bruises all over my body and a three inch contusion on my jaw and torn throat ligaments from fighting back. Thanks Ashley-Jade Thewlis and Levi Rounds for taking care of me and putting that monster on blast. "The situation has blown up on social media. He even tweeted about me being a dumbass. "75% is fangirls saying I should kill myself and 25% are people saying he can never come back to Utah. "As if having a rape kit and a severe contusion on my jaw weren't enough." "It was the Murray Police Department and I got a rape kit immediately. I've also known him for ten years. Victim shaming is a huge part of the problem with rape culture. I don't know y'all but I hope as you get older you learn that. Thank you Lacie, Danilo ∧ David."
Boswell's friend, Levi Rounds, whom she mentioned above, had this to say:
"A pile of literal human garbage named Ronnie Radke gang raped someone really important to me last night (because that's how real men treat women, with their bodyguard as backup) and tossed her out onto the curb. He's some has been, talentless musician that was playing the Murray Theater last night. If any of my friends book him, defend him, or even mention his name around me, we aren't friends anymore. I hope he dies a slow painful death surrounded by people cheering on his suffering, Christ like, minus the martyrdom. "I haven't cried this much in over a year, and nothing even happened to me. The person it happened to is one of the strongest individuals I've ever met in my life. She's going to be ok. Just the fact that someone can do this to another person makes me sick and sad for our whole race. Fuck him, his garbage music and everything he stands for. "Please no shitty jokes. This isn't an open mic forum. Just me venting online instead of kicking a fucking wall."
In response, Radke provided the following statement to Alternative Press:
"The Internet is a wonderful place because everyone has a voice. It's also an awful place for the same reason. This isn't the first time people have taken it upon themselves to spread ugly, unsubstantiated claims about myself and my friends. No one from our band or crew were arrested in Utah. After our show in Salt Lake City, we were concerned for someone who appeared to be under the influence and called 911. I personally spoke with law enforcement. I certainly was never under arrest or charged with any crime."
AP also stated that the Salt Lake City Sheriff's Department had no record of Radke being arrested or in custody at any time.