Official press release: Monster Energy Rock Allegiance Festival returns with the first ever live music event at Philadelphia's PPL Park Saturday, October 10, featuring top rock bands, along with a craft beer and gourmet man food experience celebrating what makes Philadelphia cuisine famous, unique and delicious. Monster Energy Rock Allegiance will include 12 hours of non-stop entertainment with music performances from some of the premier rock bands in the world rotating on three stages. The initial band lineup for Monster Energy Rock Allegiance includes: Rob Zombie Korn Godsmack Five Finger Death Punch Papa Roach Bring Me The Horizon In This Moment Atreyu Hollywood Undead Saint Asonia Pop Evil Nothing More Butcher Babies Art of Dying Glorious Sons The Temperance Movement Charm City Devils Devour The Day From Ashes To New Unlocking The Truth Dorothy The official aftershow party will feature a special performance by Steel Panther immediately following Rob Zombie's closing set at the tent stage on the festival grounds. "Monster Energy Rock Allegiance will bring this audience a truly unique experience that is about their favorite music and so much more. It's an event that will deliver sight, sound and lifestyle," says Geoff Gordon, President of Live Nation Philadelphia. "For those fans and artists performing, it is incredibly exciting to know that they are a part of first ever live music event at PPL Park and Soccer Stadium." "We are very excited to host Monster Energy Rock Allegiance at PPL Park," said Nick Sakiewicz, CEO & Operating Partner of Keystone Sports and Entertainment and the Philadelphia Union. "This will be the first major music concert at the stadium. PPL Park provides a picturesque backdrop with amazing vistas of the Delaware River and Commodore Barry Bridge. A central location to the Greater Philadelphia region with easy highway access makes it the ideal spot for this great show. We look forward to working with Danny Wimmer Presents and Live Nation to welcome rock fans to what will be a monster show and present the best that Philly has to offer." A special rolling discounted ticket pre-sale for Monster Energy Rock Allegiance will begin on Tuesday, June 2 at 10:00 AM ET and run through Thursday, June 4 at 9:59am ET (or when pre-sale tickets sell out) at www.RockAllegiance.com. 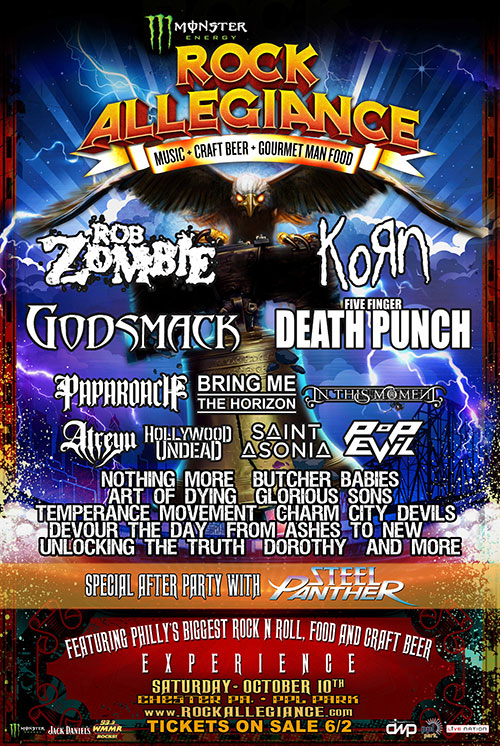 Unlocking the Truth will be in the Pepsi tent after they get out of 6th period.

Papa Roach, Godsmack AND Kprn, bro? My 14 year old self that used to want to rip my ears off on the school bus listening to this shit every day is stoked!!!

I feel like this fest will attract too many pedos. please cancel this

Year of the nu metal revival. You heard it here first.

Fight me during pop evil x616toughboyzx

This better than This Is Hardcore Fest.

I'd rather go to this than This is Hardcore.