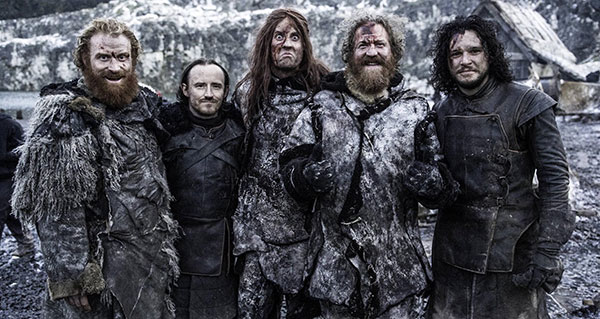 Three members of Mastodon appeared as extras on HBO hit series Game Of Thrones last night. Brann Dailor, Bill Kelliher, and Brent Hinds all played wildling warriors on the episode "Hardhome." If you haven't yet seen the episode, you may want to leave now, as the following comments from Dailor might serve as a spoiler:
"It was such an incredible experience to be on set as extras for our collective favorite show Game Of Thrones and to be wildlings murdered and then brought back to life by White Walkers was beyond amazing. I watched my best friends Brent and Bill, murdered right in front of me as I myself was stabbed in the stomach and had my throat slit multiple times, and I didn't mind at all. It made me love being in Mastodon even more. We are more than privileged and honored to have been a part of one of the greatest stories ever told on film, and the catering wasn't bad either."
Of course this isn't Mastodon's only connection with the television show, as the band contributed a track titled "White Walker" to the latest Game Of Thrones Mixtape release.

Another shot from Game of Thrones! Photo credit: Helen Sloan/HBO

More importantly, why isn't Game Of Troma a thing yet?

FRONZ HERE. THESE DUDES ARE ABOUT THEIR MONEY I WONT EVEN HATE. IF YOU HATE THEN YOUR JUST A BROKE pssy WHO NEEDS TO GET F U CKED. HAHA. STAYSICK

Seems pretty fitting. Good for them.

Mastodon and Game of Thrones both suck donkey boners. It's only fitting.

Only hipsters and fat people watch this dork shit.

Also people who have read the books. Aka people who can read. Sorry you can't read hipster metal guy.

look at all the same gay posts! what a looser talking to yourself .grow the fck up and shut the fck up.