Daughters in the studio 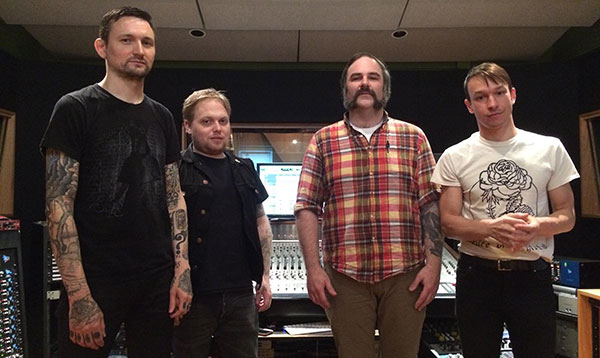 A little less than a year ago, it sure looked as if defunct Rhode Island noisemakers Daughters were working on new material. Fast forward to this week, and it seems like the new material is finally being committed to tape (or computer). Last night the band posted a photo (see above) of its members reunited in Pawtucket, RI recording studio, Machines With Magnets, the same facility where Daughters recorded their 2010 self-titled LP. As is their way, Daughters aren't keeping fans informed of their plans, so we're left to speculate, but forthcoming, new music from the group appears highly likely.

AS THE SUN SETS REUNION OR EAT AIDS

"AS THE SUN SETS REUNION OR EAT AIDS" Agree, but I'll take what I can get.

"AS THE SUN SETS REUNION OR EAT AIDS" "Agree, but I'll take what I can get." Essentially this. All the ATSS records and the first Daughters record are great, but their later direction was less interesting and kind of annoying. Hope they go heavier and weirder this time around.

y'all need to recognize Nick "The Stripper".

I didn't know they had a midget in the band. That's awesome

from beltcore all the way to hipstercore this band has always sucked dîck, sounded like the singer was holdin in a 4 day shit when he sang. pretending not to try is stoked.

The trick photography in this photo is amazing. In real life, all of these guys are fcking midgets (like, 5' 6" and under) except for the bass player (mutton chops) he's like 6' 4"

Best news in a while.

As the sun sets will never get back together because Joe is a nutcase that beats women. Remember "playgirl" they played tigers den and fsu smashed out the van

People who listen to great music are stoked.

The midget you speak of is an insanely good drummer especially on each individual voice is dead in silence, who is Joe? Joe krewko? He was never in as the sun sets he was in crippler cross face pre atss then he was one of d original bury your dead singers back when they had two

Singer is looking much healthier these days... must have kicked the coke habit

krewko played bass on the first ATSS record. The singer didnt do coke, he was a drunk. the drummer did all the coke. AAAAALLLLLLLLLL of it.

Spent a week in the studio. Release is 4 minutes long.