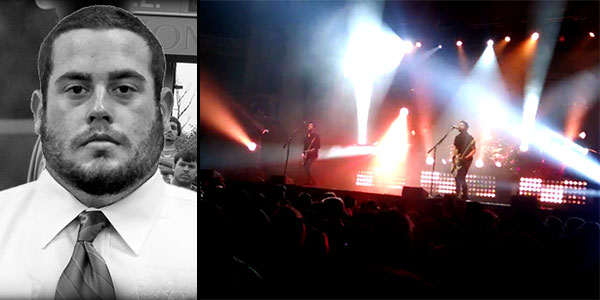 Left: Kyle Kirchhoff; Right: Chevelle playing in Chicago on May 22, 2015 prior to accident
A gruesome accident claimed the life of a man on Friday night during a show by alternative metal/hard rock band Chevelle. The concert, which took place at the Aragon Ballroom in Chicago, IL and also featured The Used and Marmozets, was shut down during Chevelle's set due to a "medical emergency." Not long after, it was revealed that the "emergency" was the result of a man falling from a catwalk. Kyle Kirchhoff, 24, of Hanover Park, fell from the catwalk and was impaled by two pieces of metal protruding from the floor and suffered two puncture wounds to the chest area. Kirchoff was taken to Weiss Memorial Hospital where he died. Prior to being made aware of the details, the band issued the following:
"To our fans at the Chicago show: We are very sorry we had to end the show early. Due to a serious injury in the crowd the fire marshal was forced to cancel the rest of the show. We hope that whoever was injured makes a swift recovery."