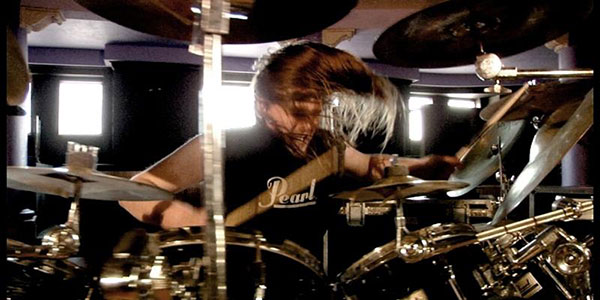 Ryan Shutler, drummer of Kenosha, Wisconsin thrash band Lazarus A.D., passed away yesterday. Shutler was reportedly 29-years-old. Details surrounding his death have not been disclosed, though it's being said that a heart attack may have been to blame. Lazarus A.D. has been relatively quiet since releasing an album with Metal Blade Records in 2011. UPDATE: Shutler's bandmates have now issued a few statements on his passing. Here you go:
As a lot of you have heard recently. It is with deep sadness that we share the news that our closest friend and brother, Ryan Shutler, has passed away. This unexpected loss of our friend is a shock and we are all trying to cope with his sudden passing. Ryan left his footprint on this earth, through the many friendships he made in his life. Many have had the pleasure to know Ryan on a personal level and to witness his immense amount of character and charisma. And for so many more, the incredible talent he exuded as a drummer. All of us, will cherish our many adventures we had together. Whenever we needed a laugh or someone to confide in, he was always there when we needed it the most. He was truly one of a kind. ~Alex, Dan, & Jeff "Let me start by saying, I honestly don't even know where to begin. Words will never be able to describe what I am feeling for the loss of my brother Ryan Shutler. He was the most raw and naturally talented human I have ever had the pleasure of knowing. I could not fathom where my life would be without him. I owe every bit of our band's success to his vision, ability, personality, and overall presence in life. If anyone had the pleasure of meeting Ryan, they immediately knew he was special, the guy was a character, and his personality was infectious. Competitive in every aspect of life and always delivering a knockout performance no matter what he was doing. It tears me apart knowing that I will never be able to share the stage again with whom I've considered one of the best drummers to ever play the genre of heavy metal. We had a serious connection when it came to songwriting, literally reading each other's minds in an effortless way. I will miss seeing his absolutely ridiculous smile when he would play an improv fill in a song, knowing that I would catch it, and smile right back at him. Ryan just had it. He was born to play drums. And that is truly the saddest part. The world is now robbed of hearing what he was truly capable of achieving as a drummer. I still...cannot believe I'm sitting here writing this. You will be sorely missed Ryan. You drove me to be a better human being, and constantly question myself and my ability. And I will be forever grateful for that. I know you are up there slammin' em back with all the rock legends. Rest in peace my friend, my brother." ~Jeff Paulick At this time, we ask everyone to take a moment to remember Ryan Shutler and the good times he shared with all of us. We appreciate everyone's condolences and we hope to have more news soon, as we too are still trying to understand. ~Alex, Dan, & Jeff