Monday, May 11, 2015 10:55 AM PT / 4,830 views
Official press release: Today's Mixtape Festival has announced its full lineup for this year's two-day event, taking place Saturday, August 15th and Sunday, August 16th at The Emporium in Patchogue, NY. In addition to previously announced headliner, The Movielife, Today's Mixtape Festival will feature sets by: Every Time I Die Real Friends State Champs Incendiary Iron Chic Counterparts A Loss For Words On Broken Wings Suburban Scum Giants At Large Gates Knocked Loose Gnarwolves Brigades Gatherer Commonwealth The festival will simultaneously mark The Movielife's first Long Island show in over 13 years, as well as A Loss For Word's final performance in Long Island. Andrew W.K. will also be performing at the official festival after party on Saturday night. VIP and weekend passes are now available. "Today's Mixtape Festival 2015 lineup includes the most exciting and well-known bands that we have had on our festival to date," states Jake Zimmerman, founder of the festival. "We are thrilled to bring a variety of the heaviest hitters in punk rock, hardcore and emo. After years of requests, The Movielife will make their hometown return as part of Today's Mixtape Festival-their first Long Island show in thirteen years." A portion of this year's festival ticket sales will go towards The Safe Center, Nassau County's only comprehensive victims' services agency, offering confidential and cost-free services to victims of child abuse, domestic and dating violence, rape and sexual assault, and human trafficking. "The Safe Center is an important resource for sexual abuse victims on Long Island. This relates directly to issues in the punk rock and hardcore communities, issues that are usually ignored instead of being made aware of, discussed, and resolved," shares Zimmerman. "As a community and as decent human beings, we cannot stand by and let these victims' voices go unheard." 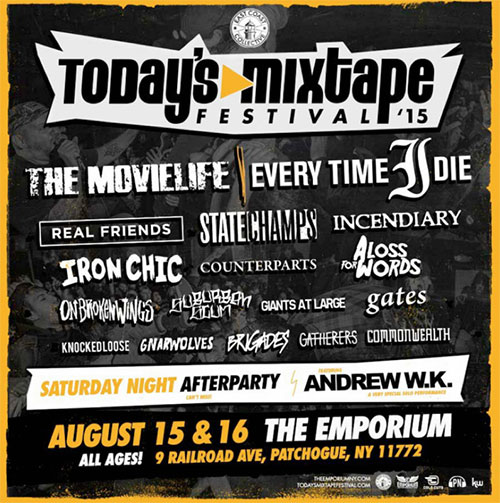