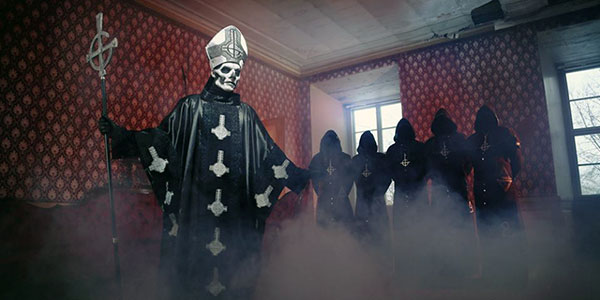 A few days ago, Harddriveradio.com revealed the alleged title and release date of the forthcoming album from Swedish occult band Ghost. The aforementioned post has since been deleted, but you can see what they had to say below. Notably, the new effort is reportedly titled Meliora and will hit streets on Friday, August 21st.
Well, in other news today: Yesterday I heard the forthcoming new single from Ghost B.C. called "Cirice" from their new album, Meliora. Produced by Klas Ahlund, whose producing/writing credits include Madonna, Katy Perry, Swedish House Mafia, and mixed by Andy Wallace, the album will be released August 21. The album title is Latin for "better" and "Cirice" refers to church. As you know, the band's identites are never revealed. Their frontman, soon to be a new Papa Emeritus (now III), dresses like a pope and the "Namesless Ghouls" round out the musicians. I am surprised at the news of the replacement of Papa Emeritus II. I must get the low down on that. I did hear from a source close to the band this new album "kicks ass." Is the world ready for a new Ghost B.C.? I do know the band will be in NYC the same time Pope Francis is here this September, which is also when their tour will kick off. Rumor has it that a few years back, our pal Dave Grohl (who produced an EP of cover songs for the band called If You Have Ghost) perforned with the band as a Nameless Ghoul. That darn Dave, he wants to hold the record for performing with as many bands as possible I think!