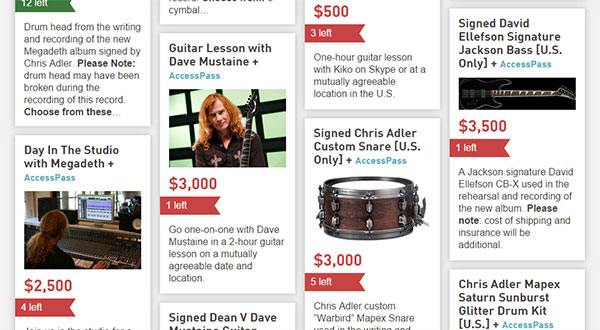 Megadeth has officially launched a PledgeMusic campaign to fund their upcoming studio album, which will of course feature both new guitarist Kiko Loureiro and Lamb of God drummer Chris Adler. Here's the official pitch:
"Megadeth has entered the studio to begin recording their 15th album and the band wants to bring you along for the ride. "For the first time, Megadeth is going to bring you into the process and give you a window into the world of Dave Mustaine, Kiko Loureiro, David Ellefson and Chris Adler. Pre-order the album digitally, on CD or on vinyl plus tons of other unique offerings like signed CDs, signed vinyl, gear from the studio and much more. "No matter what you order, you will get access to a variety of behind-the-scenes content such as photos and videos from the writing and recording sessions. You'll get full access to the process in real time. "Thank you for your continued support."
A slew of perks are available in conjunction with both digital and CD versions of the new album, including apparel, vinyl, autographed drumsets, handwritten lyric sheets, and even a two-hour songwriting session with Megadeth frontman Dave Mustaine.