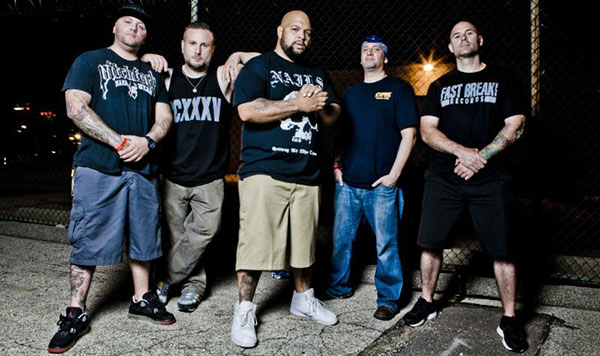 Official press release: Fast Break! Records is proud to announce the upcoming release of Stroudsburg, Pennsylvania-based powerhouse, Wisdom In Chains, as the quintet completes their bruising fifth full-length recording for release late this Spring. Mid-2015 will see the rise of Wisdom In Chains' anxiously anticipated fifth studio full-length, The God Rhythm, backed by Southeastern Pennsylvania-based Fast Break! Records. The God Rhythm injects a continued evolution of awareness and intelligence into the genre, all while destroying clichés, relentlessly crossing boundaries and claiming those new territories, effectively ushering in a new era for the band. Mixing a hardline return and development of infectious oi!/punk-inspired hooks and courses, while maintaining their traditional hardcore roots, Wisdom In Chains has clearly has pushed the envelope of their previous works beyond all previous thresholds, and the result is the band's finest work to date. The God Rhythm is also the first recording with new drummer Luke Rota from the Bronx (ex-Roger Miret and The Disasters, Stigma), who joins the rest of the crew, vocalist Mad Joe Black bassist Evan, and Richie Krutch on and Mav on guitars. The God Rhythm will see release on CD, LP and digital formats on June 30th. Stand by for an extensive behind-the-scenes trailer on the album's creation, audio from the record, preorder options, an official video and more in the coming weeks.