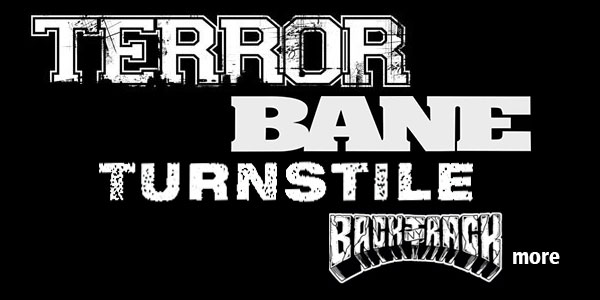 If the vocalist of Backtrack was speaking the truth last week, this summer's installment of "The Life & Death Tour" should have more than a few hardcore fans excited. According to multiple reports, on Friday night in Chicago, Backtrack's singer revealed that later this year "The Life & Death Tour" will be rolling across the United States and will feature Terror, Bane, Backtrack, Turnstile, Forced Order, and Heavy Chains. Obviously, nothing official has been revealed yet, however, these reports almost always turn out to be legitimate. Stay tuned.

this is sick, basement dwellers that sit on lambgoat are not be stoked.

Id go to every show and fight every lg f@ggol at every set. See me!!!

Saw them the next night in Springfield, MO and Aaron B from Bane mentioned they were doing this tour w/ Backtrack. Didn't say anyone else.

if its a bunch of young bands people are pissed, if a bunch of bands who have been around for 10+ years its a tour that would have been cool in 2000, lambgoat is just an unhappy bunch of people

This will be def!

lambgoat were the complaining and bitching never stops

wait, pretty sure i saw this exact line up switch Turnstile for Code Orange

this like is an exact lineup from before but whatever. terror and bane never get old.

People in their mid 30s who act like they're 14 are stoked.

remember when BANE was on their final tour? Bane, Cher, and Barbra Streisand are setting up a "Farewell Tour" Fall 2016 be there!

Doug funnie is stoked for turnstile and stage diving during terror

Take off all the bands but Bane and it's a good tour.

Same tired package over and over

who tf are bane and terror? washed up metalcore no one cares about lolz will be getting nachos during there set! will m0sh hard AF for turn style