This is Hardcore 2015 lineup announced

The lineup has been announced for This Is Hardcore 2015 (aka TIHC 2015 or This Is Hardcore X), set to take place July 23, 24, 25, and 26 at the Electric Factory in Philadelphia, PA (July 23 will be at the Union Transfer).
"Special sets include the return of Chokehold, American Nightmare's first show back in Philly, the Misfits playing Earth AD in its entirety, the Last Bane TIHC appearance, the Exploited's first show in the US in over a decade and H20's 20th Anniversary Set... "This is our finest lineup yet spreading a wide berth of what Hardcore punk was and is from 1980 to 2015. "This is our 10th festival and we are going to release more info on afterparties at Underground Arts, Voltage Lounge and KungFu Necktie later this year.
Here is the roster in alphebetical order: Absolute Suffering All Out War American Nightmare Bane Biohazard Blistered BreakAway Chokehold Code Orange CroMags Cruel Hand Defeater Disengage Eternal Sleep the Exploited Foreseen Foundation Fuck You Pay Me the Geeks H2O Homewrecker Killing Time Malice At the Palace Mindset the Misfits Morning Again Nails Negative Approach Power trip Reach the Sky Rival Mob Sand Slapshot Snapcase Suburban Scum Time Bomb True Love Turnstile Twitching Tongues Wisdom In Chains Xibalba 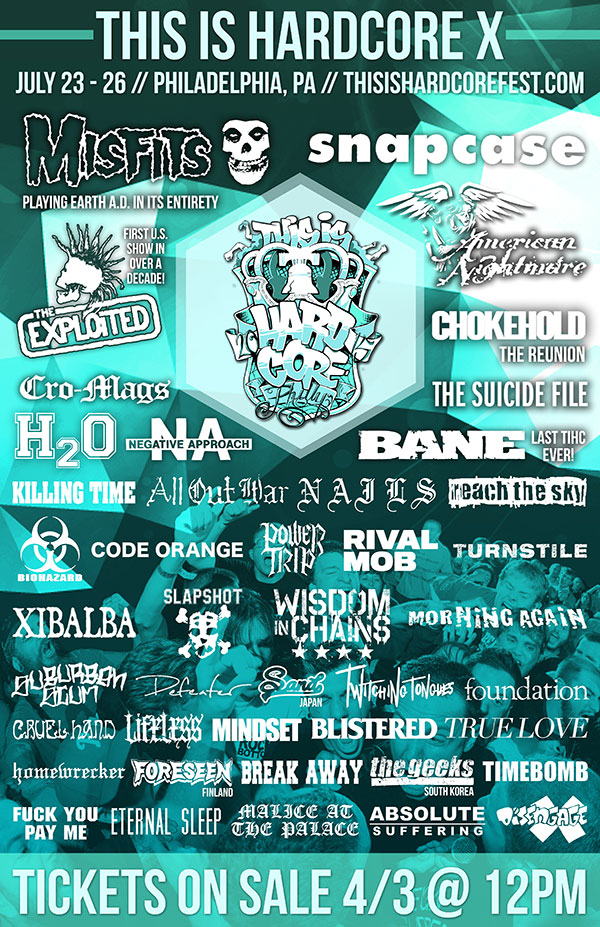