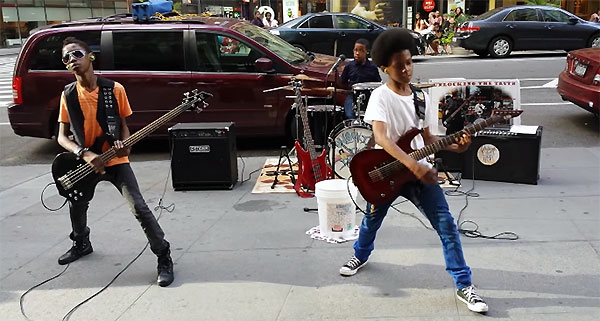 In the wake of the news that Brooklyn teen metal sensations Unlocking The Truth are trying to extract themselves from their contract with Sony, in addition to a new documentary chronicling the band's industry journey, The Daily Beast caught up with the musicians to get the latest on their situation. "It's been very difficult. We're speaking to our attorneys about leaving Sony, and it's very complicated," says bassist Alec Atkins, 13. "The album is ready, but because our attorneys are talking about us leaving the record label, it's going to be a whole process of getting our music back." Describing some of the meetings the band has had with Sony, Atkins vented to The Daily Beast, "It was pretty difficult at times with these meetings -- especially with this one particular lady at the label, who had a meeting with us once where she was just talking at us for six hours. We were pretty young at the time so we were pretty restless and wanted to get up and do something else, but she just had us in this meeting for six hours." "There are so many different types of meetings," added drummer Jarad Dawkins. "Sometimes we have meetings at our lawyer's office, sometimes we have a meeting with a company. It depends on what the occasion is." Luke Meyer, director of the aformention documentary, titled Breaking A Monster, explained to The Daily Beast that the "lucrative" record deal isn't quite as impressive as it sounds:
"The $1.8 million is what happens if you add up all their advances for five records, and it increases in amount with each successive album," says Meyer, who explains that in order to go beyond their advance, they need to sell over 250,000 copies of a single album, which these days is a bit of a pipe dream. "That's what everyone says about the music industry," adds Meyer, "it's got all this glitter on it, but it's always less flashy than it looks."
Despite their rude awakening to the industry, Unlocking The Truth isn't throwing in the towel just yet. Dawkins says, "Our whole lives changed after we were signed. We can't just go out and 'do things,' we have to get everything approved. But we realize that we're not normal kids anymore and we have a career ahead of us, so we don't want to mess that up."