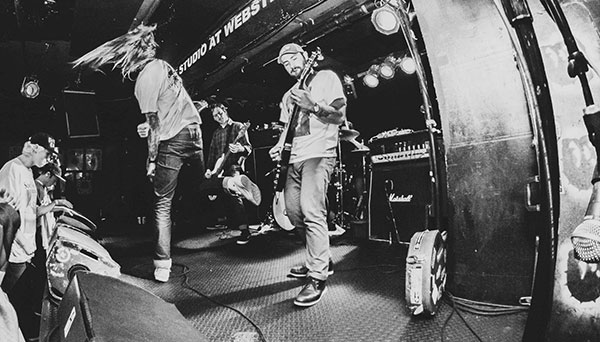 Official press release: Bridge Nine Records is elated to announce Malfunction as the latest addition to their roster. The band is currently putting the finishing touches on their full-length debut, Fear of Failure, at GCR Audio Recording Studios with Jay Zubricky. It'll then go off to Taylor Young of Nails and Twitching Tongues for a mix, and receive mastering at Audiosiege (Blacklisted, Integrity, Poison Idea). The quintet from Buffalo, New York, formed in 2011 and wasted little time getting music out to the world with their Locals Only demo, followed by an appearance on the Bad Meets Evil compilation. This soon led to them getting picked up by upstate hardcore standby Reaper Records, who released their Finding My Peace EP in 2012, with the band issuing a cassingle in the summer of 2013 (all the while touring the country to get deserved widespread attention). Fear of Failure will thus mark their first batch of new material in two years, with a summer release in the works. Malfunction have been seen on the road in the past with acts like Harm's Way and Bitter End, and will be back at it again later this week with labelmates Backtrack in supporting Bane on a full U.S. tour (with an independent pitstop at United Blood Fest this weekend).