All Out War to release new EP this summer 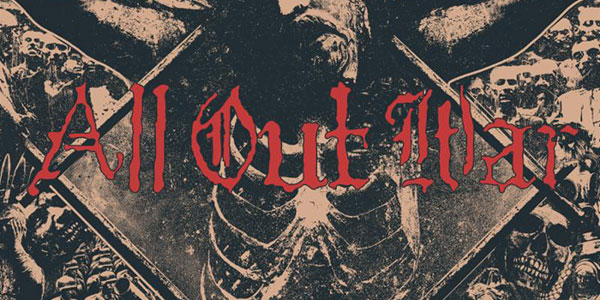 Official press release: Long-running New York-based hardcore/metal stalwarts, All Out War, declare 2015 as the year of the Dying Gods, as the quintet prepares its latest set of recordings for release this Summer. Since 1991, All Out War has assaulted the masses with their punishing metallic hardcore aggression, and through a multitude of recordings, including a pile of singles and EPs, their 1997 debut LP, Truth In The Age Of Lies on Germany's Gain Ground Records, and four subsequent LPs on Chicago's Victory Records -- For Those Who Were Crucified (1998), Condemned To Suffer (2003), Assassins In The House Of God (2007) and Into The Killing Fields (2010). Their arsenal of recorded misanthropy and waves of worldwide touring, has led the band to become a respected staple act for metal and hardcore fans everywhere. In 2013, after several years off the grid, All Out War came crushing back with the reunited For Those Who Were Crucified-era line up and laid waste at both This Is Hardcore Fest and 2014's A389 Records Bash. The momentum has been growing ever since. Now nearing the band's two-and-a-half decade mark, All Out War proves that age has only refined the band's killing capabilities on Dying Gods, a brand new EP which the band is about to unleash upon humanity early this Summer. Dying Gods sees the band return to the sound of For Those Who Were Crucified, and just like that timelessly brutal album, Dying Gods was engineered and produced by Steve Evetts (Hatebreed, Turmoil, Buried Alive, Suicide Silence) at West West Side Studios in New Windsor, New York. The record sees the band bringing five decimating new original tracks and covers of two iconic underground anthems. In 2015, All Out War returns with Dying Gods. You have been warned. Stand by for additional details on the carnivorous sounds of Dying Gods to arise in the coming days.