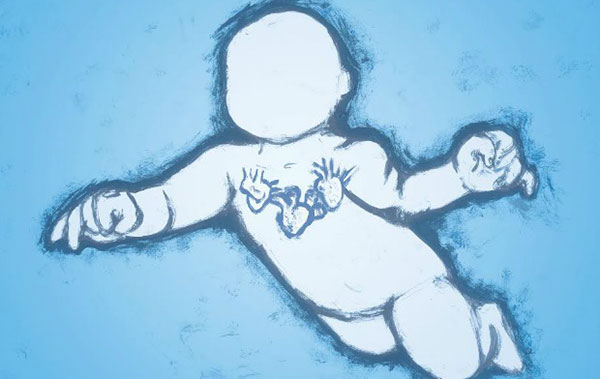 Official press release: Longrunning independent record label Robotic Empire is thrilled to announce their second tribute to Nirvana; with the breakout "Nevermind" album being covered in full by a diverse range of bands. The new tribute LP, titled "Whatever Nevermind", is being released April 18th in conjunction with Record Store Day 2015, and sees contributions from Boris, Cave In, Circa Survive, Kylesa, La Dispute, Nothing, Pygmy Lush, Thou, Torche, Touche Amore, White Reaper, Wrong, and Young Widows. Robotic Empire label owner Andy Low elaborates on the tribute: "I'm beyond excited to reveal our second tribute to Nirvana, as the lineup assembled for 'Whatever Nevermind' has some of my favorite active bands running Nirvana's classics through their own creative filters. What they've come up with is a great merging of individual style with a nod to the influence of 'grunge'. "Nirvana clearly doesn't need further accolade; they've been inducted into the Rock n' Roll Hall of Fame, are known by most music fans on the planet, and are one of the all-time greats. That being said, Nirvana helped shape the tastes of myself and countless musicians I respect, and to pay even a slight homage to them in return is a privilege. Working with the amazing range of talents involved here, including several return contributors from the first tribute LP, is an absolute honor, and I can't wait for people to hear the results." Circa Survive's take on 'Drain You' premieres today via Alternative Press and can be heard here. Track listing: 01. Young Widows - Smells Like Teen Spirit 02. Torche - In Bloom 03. Kylesa - Come As You Are 04. Cave In - Breed 05. Boris - Lithium 06. La Dispute - Polly 07. White Reaper - Territorial Pissings 08. Circa Survive - Drain You 09. Touche Amore - Lounge Act 10. Wrong - Stay Away 11. Pygmy Lush - On A Plain 12. Nothing - Something In The Way 13. Thou - Endless, Nameless / Even In His Youth (Bonus Tracks) The vinyl edition of "Whatever Nevermind" is being released as a 12" + bonus 7" combined, with artwork inspired by and mutated from the original album, and includes a high-quality digital download. Record Store Day 2015 will see an exclusive color-vinyl edition accompanied by a large poster, akin to the 2014 RSD release of "In Utero: In Tribute". The tribute will also be available April 18th to download/stream from all digital outlets, with digital pre-orders now available from iTunes including immediate availability of Circa Survive's cover of 'Drain You'.