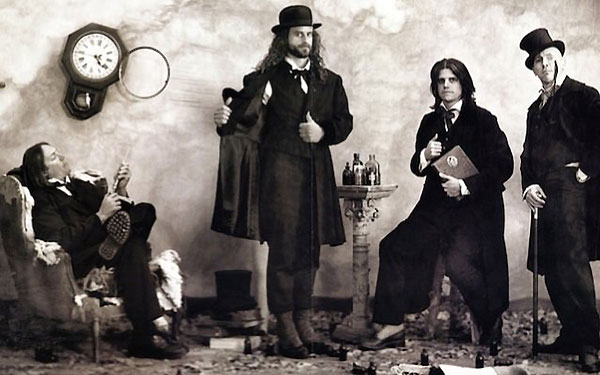 Last summer, Tool revealed that one of the reasons they'd been taking so long to release a new album was a "multi-level lawsuit" involving the band and its insurance company. Fortunately for Tool, the legal matters are now behind them. In a new interview with Yahoo! Music, Tool guitarist Adam Jones says "the whole thing is finally over." "It got really ugly and shameful," Jones said. "This is a real simplification of the matter — but imagine paying auto insurance, getting into a wreck, and expecting the insurance company to cover you. And they come back to you and say, 'Well, you drive an SUV and we don't consider that an auto so we're not going to cover you.' And then they turn around and sue you because you want them to cover you. It's crazy." The case was finally settled late last week in the band's favor. "I had a real feeling that things were going to go in our favor because the day the trial was supposed to start, the venue was changed on us," Jones told Yahoo!. "We moved over to a North L.A. courthouse and we had a brand-new judge, who was fantastic. You know what his name was? Randy Rhodes! I knew the power of metal, and my appreciation of metal was someday going to be like a guardian angel. But he was great. He came in and took over, and he's the reason the whole thing is finally over." As such, Tool can now put all of their energy into their new album, and Jones tells Yahoo! Music that he hopes the new LP will be finished and ready for release before the year ends. Jones did, however, inject a bit of uncertainty into the timetable: "We're older guys now. Everyone kind of has their own life, and the fire that burned in us when we were in our 20s isn't there anymore. There's still a fire, it's just a different kind of fire. So of course, we're writing and working hard, but we've gotten to a point where we're relaxed and we're meeting occasionally to get the writing done instead of every day. But I feel like every day we work on the songs is a productive day and we're getting closer and closer to finishing them."