Official press release: Legendary death metal unit, Six Feet Under, will release their eleventh studio recording this Spring via Metal Blade Records. Titled Crypt Of The Devil, the ten track slab of audio violence was composed by vocalist Chris Barnes and Cannabis Corpse bassist/vocalist Phil "Landphil" Hall. While on tour with Cannabis Corpse in 2013, Barnes and Hall met and kept in touch. Barnes would later lend his vocals to a track on Cannabis Corpse's From Wisdom To Baked. That same year, Hall and Barnes joined forces to pen brand new Six Feet Under tracks. Barnes lauds Hall's take on the Six Feet Under style of death metal and stated that this material was, "where my wheelhouse is - it's where I thrive vocally and lyrically." With Crypt Of The Devil, Barnes has worked to continue the overall story from the previous works, wherein he is penning lyrics from the perspective of a serial killer. Or as Barnes describes, it's a "winding journey through his mind. The songs paint a picture that's not necessarily linear, rather a meandering back and forth through a dark soul." Soon-to-be-classic cuts such as "Open Coffin Orgy" serve as exemplary examples of the fruits of Barnes' macabre muse. 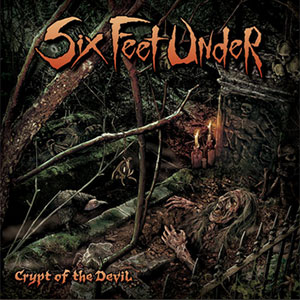 Recording for the album took place at Hall's studio in Virginia. Hall tracked rhythm and bass guitar, while his brother, Josh Hall, tracked drums, and guitarist Brandon Ellis tracked the majority of the album's leads. Barnes took to London Bridge Studio (Pearl Jam, Alice In Chains) in his new base of operations in Seattle, Washington to record vocals and in fact holed himself up in the very same booth where Layne Staley tracked his words. The mix was completed by Rob Caldwell (Cannabis Corpse, Iron Reagan) in Sarasota, Florida and mastering was done by Alan Douches (Cannibal Corpse, Revocation) at West West Side in New Windsor, New York. Crypt Of The Devil stands as a truly collaborative and cross-country effort from a selection of today's finest metal minds, and the result is a refreshing Six Feet Under experience. Or as refreshing as brutal, visceral death metal can be, anyway. Sample the sadistic wares of new single "Open Coffin Orgy": Crypt Of The Devil track listing: 01. Gruesome 02. Open Coffin Orgy 03. Broken Bottle Rape 04. Break The Cross In Half 05. Lost Remains 06. Slit Wrists 07. Stab 08. The Night Bleeds 09. Compulsion To Brutalize 10. Eternal in Darkness Crypt Of The Devil will see release via Metal Blade Records on May 5th, 2015.

The story of Six Feet Under is one seriously tragic cautionary tale.