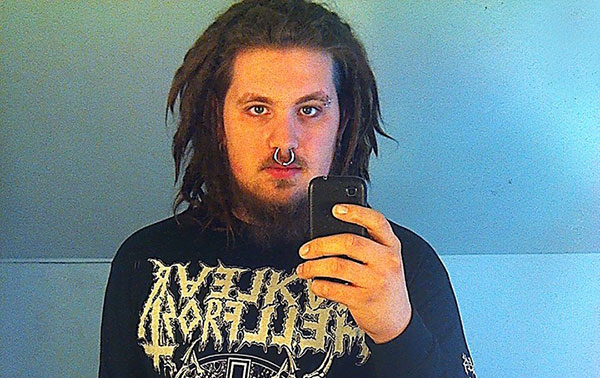 Hopefully putting an end to the shitstorm that took over the metal corner of the Internet yesterday, former Nuclear Hellfrost frontman Reece Eber has taken the blame for the entire Dimebag Darrell grave site fiasco, issuing the following apology:
"This is Reece Eber, the guy who ignorantly acted like a fool and pulled the dumbest possible delinquent act of my life… And where to begin… I've become famous today in the worst possible way. My friends and I have received death threats and multiple insults over the past day or so, I've made the news, and all I can say to sum it all up is I'm deeply sorry. I acted ignorantly and completely out of line. There is NO reason for doing what I did, and when I say 'I', I mean ME alone. "My friends were not present for the event and should have caught up with them when they were walking away, instead i left a piece of paper with an insult to a man many people idolize and for a cheap laugh that I didn't think about the consequences. I did not carve into it and it was a piece of paper and nothing was stolen. I'm not asking for forgiveness, I'm not asking for sympathy, I am only attempting to express an apology that I want to reach out to the people I hurt and offended with this dumb act. "There is no reason for what I did and it was the worst mistake I've made in my young and evidently dumb life. I don't blame the threats and comments. I understand how you feel and that's why I'm an asshole because I knowingly was out for blood, and so I don't blame anyone for wanting to do god knows what to me. The fact of the matter is I feel awful and guilty and this will stick with me forever, just like the Seinfeld guy using the N word… "I can not express how sorry I am to Vinnie Paul and the Abbott family for the distress I caused, and the other members of Pantera and other acts Darrell was a part of. I owe everyone an apology for my actions because they were uncalled for, and horrible, despicable, and I went way too far. Some jokes are NOT funny and this is one of them. I took a joke way too far with a piece of paper and some hurtful words and as I've expressed, I don't expect any sort of acceptance or sympathy. "I'm doing this out of the guilt I feel, knowing I caused this and I want to attempt to make it right even though I'm sure many will not accept this… I'm truly sorry for my actions and I'm sorry I put people I care about in potential danger and upsetting people for my selfish and morbid sense of humor. Anyways to wrap this up, I hope this was read, I hope at least someone will accept this and I hope for a better future for everyone…"