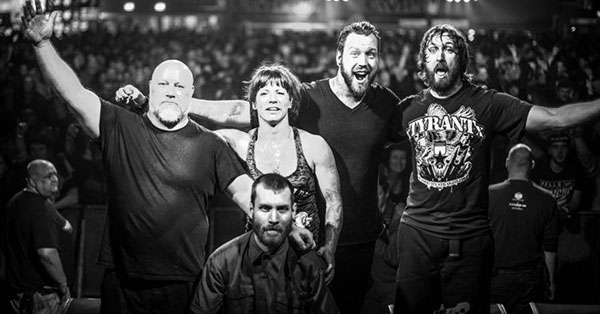 Official press release: Austrian Metal Powerhouse Napalm Records is pleased to announce the signing of Detroit Michigan's Walls Of Jericho. The band is currently working on their new album, which is their first full length since 2008. After releasing a demo track "Restless" earlier this year, the band felt the itch again and decided to get back to recording. The resulting album be released by Napalm Records later this year. Drummer Dustin Schoenhofer on signing with Napalm Records: "All of us in Walls Of Jericho are proud and very excited to have signed with Napalm Records and are looking forward to finally finding the right partnership to release our new music with. We would like to thank both Napalm and all our Fans and Family for being so patient with us these past seven years since our last release cause its long overdue." Thomas Caser, Napalm Records VP: "We are thrilled to work with one of the most exciting acts out of this genre and one of the best live bands out there! Walls Of Jericho have left their mark in the music industry and yet there is so much more to come for this band. Watch out for the band's new album this year and make sure you catch them live at some point if you have not seen them!" Seemingly overnight, stylized bands playing strains of melodic hardcore have sailed up the pop charts. But for Walls Of Jericho things have played out a bit differently. During the scene's ascension, the band's members have all but shunned the idea of a genre tag or an "image" and have instead focused their energies on making music that will survive strictly on its musical merits. Most bands in the world can be lumped into one category or another, they are shuffled, redefined, and in that way they begin to lose the qualities that could make them important or meaningful. The greatest bands, the most influential or memorable, are the ones who don't try to fill the role set for them, who don't pursue anything other than the desire to make music, and the need to express that art to an audience. From the start this has been the mind-set of Walls Of Jericho.