Initial details have been announced for Rain Fest 2015. The event will take place at Neumos in Seattle, WA on May 22, 23, and 24. Tickets are on sale now, and the first lineup reveal includes the following bands (a second lineup announcement will be made on February 15): All Out War Angel Du$T Baptists Caught In A Crowd Chain Of Strength Forced Order Freedom Gag Incendiary Keep It Clear King Nine Mindset New Gods Red Scare Rotting Out True Love Turnstile Vexx Wreck 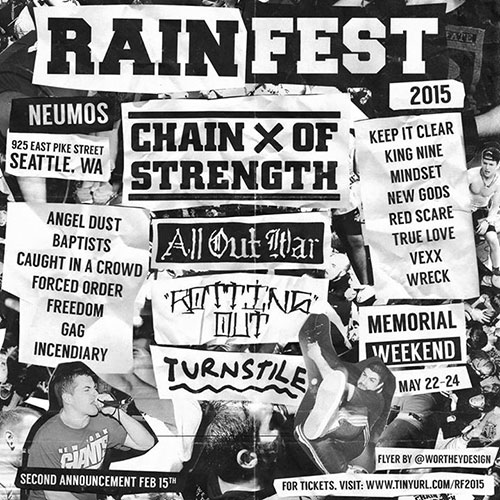 All Out War, Chain of Strength, and a bunch of bullshit.

surprised rotting out would play this, doesn't seem like the warped tour type of fest.

Jeez this fest straight up blows!

Bands that think black and white photos make them look like they're a part of something important are stoked.

surprised rotting out would play this, doesn't seem like the warped tour type of fest. LOL

emmure should be on this.

the only way this festival could be more homosexual is if genghisjohn showed up with his butt touching antics.

King Ten is not stoked

The attempts at humor on this site are just sad sometimes.

Hopefully it gets rained out.

Rick Ta Life is not stoked.

I wonder if Caught in a Crowd knows about Alone in a Crowd. Also lol @ Turnstile logo drawn by fifth grader

Fest gets shittier and shittier every single year. This lineup is horrible. NW has no good bands and Neumos sucks.

No joke of a band Drowning? Bryan is not stoked

will go only if Champion and Sinking Ships play

Great fest. All Out War & Chain of Strength are a great combo.