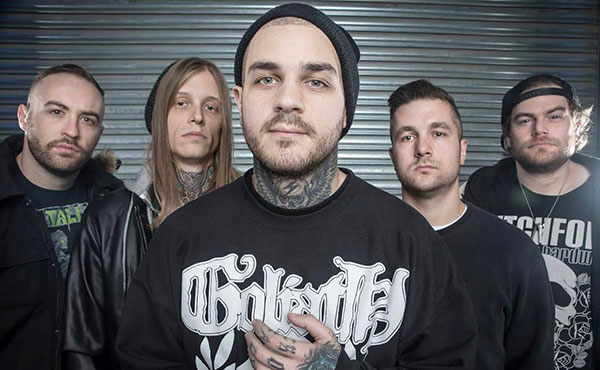 Emmure has officially named Adam Pierce (All Shall Perish) as their full-time drummer. This should not come as a great shock to anyone as Pierce has been playing with the band since this past summer (when drummer Mark Castillo exited the group). Emmure has issued the following statement:
"We are happy to officially announce Adam Pierce being the new drummer for Emmure. His professional attitude towards touring, writing music and being in Emmure has given us a very positive and energetic outlook for the future. This may not be news to some of you as we've been all over the world together at this point. We welcome Adam to the group."

Kids with long hair are pissed

So is All Shall Perish done or...?

is Frankie straight up wearing a Goliath crewneck?

That's because he's really fcking good at drums. It only makes sense.

Thank you anon who made the Scrap Daddy reference.

No care asp died when original singer Craig left. Adams not even the original drummer so again, no care . Maybe mmure can play in Whittier at the bowling alley hahahahaha

hes going from killing it with ASP to playing 45min in nothing but breakdowns. china cymbals arent stoked

All Shall Perish is better than Suicide Silence and Emmure combined.

POOP ON ALL THESE GUYZ

Is it a coincidence that the same day Adam Pierce was announced as the new drummer for Emmure is also the same say he professed his undying love for man meat?

Guy on the far right is actually Oscar the Grouch.

is frankie fat or not? I've always questioned this.

It sure took Ragetti a while to get another gig after Pirates of the Caribbean.

finally they got a decent musician... scene kids hardcore dancing in their living rooms right now

anonymous 14 hours ago is frankie fat or not? I've always questioned this. permalink | report abuse He is fat. But not as fat as he used to be. Probably all the cocaine

i give this new guy 6 months...nobody can f**king tolerate Frankie for very long...

Emmure is on this.