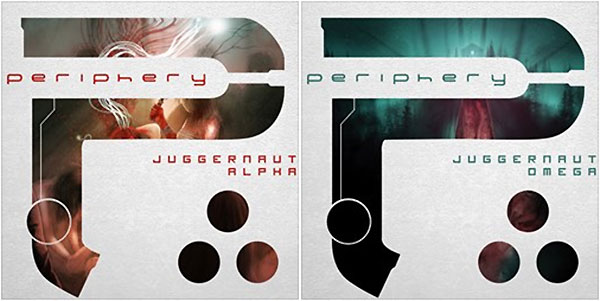 Official press release: Periphery have unveiled the artwork and track listing for their forthcoming albums, Juggernaut: Alpha and Juggernaut: Omega, both available on Jan. 27 via Sumerian Records. The album artwork reflects the story behind the Juggernaut releases, a tale of birth and re-birth with the first album (Alpha) sharing the origins of the main character and the second offering (Omega) sharing the gut-wrenching twists and turns the tale takes. Each release is housed an outer, die cut o-card with the band's signature P and three dot logo, which, once removed features a booklet cover from graphic novelist Justin Randall. Each album includes a 12-page booklet with numerous illustrations that add a visual layer to the conceptual albums. Track listings for the Juggernaut albums are: Juggernaut: Alpha 01. A Black Minute 02. MK Ultra 03. Heavy Heart 04. The Event 05. The Scourge 06. Alpha 07. 22 Faces 08. Rainbow Gravity 09. Four Lights 10. Psychosphere Juggernaut: Omega 01. Reprise 02. The Bad Thing 03. Priestess 04. Graveless 05. Hell Below 06. Omega 07. Stranger Things Meanwhile, some material from the forthcoming album can be heard via the Juggernaut Tour promotional video below:

Worst news I've heard all day and both of my parents died a couple of hours ago.

The music just has to be good.. the pretentious hogwash is irrelevant if the music sucks.. Just sayin

There was a punch line but no joke...

I hope that new song was "The Bad Thing".

Meshuggah is once again not stoked.

why not make the first track alpha and the last track omega? would be so orginal just like their music.