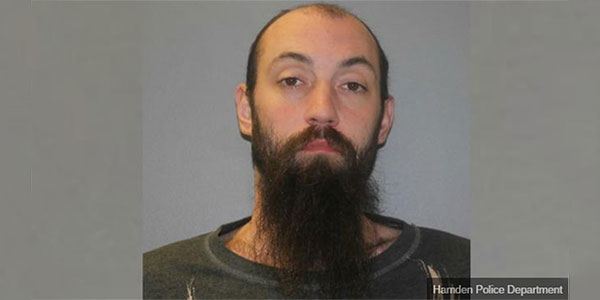 Joe Morbidelli, vocalist for Connecticut metal band Dead By Wednesday, was arrested Tuesday in Hamden after breaking into a pharmacy and apparently stealing "a large quantity of pills, cough syrup, and medical supplies." Police ultimately arrested Morbidelli, age 27, on charges of third-degree burglary, second-degree criminal mischief, sixth-degree larceny, possession of narcotics, and illegal possession of narcotics within 1,500 feet of a school. He is currently being held on a $50,000 bond, with a court hearing scheduled for November 25. Dead By Wednesday has previously released material with Eclipse Records and Stillborn Records, the now defunct record label of Hatebreed frontman Jamey Jasta. Morbidelli's bandmates, or rather ex-bandmates, have issued the following statement:
"They say honesty is the best policy so we feel as a band that we need to be honest to all our fans and friends who have supported us through all our ups and downs. We are saddened to say that after many years of being family, band mates and friends, we as a band collectively, are forced out of love and care to turn our backs and part ways with our singer and brother Joe Morbidelli. He unfortunately needs to fix himself before he can take over the world with or with out us as a singer. His position may or may not be here for him if he were to completely stop his drug use and drinking, get some legitimate help and prove to us that he is clean & sober but he has become to much of a liability for us to continue working with him on a professional level. We can not have someone in our camp that we can not trust. No matter what happens, we wish him the best in all sincerity and we hope he can find some peace and become healthy again. We are deeply sorry to all the fans that also love Joe as our frontman but please try and understand the position and circumstances that we have in front of us and have been forced and placed unwillingly on us and out of our control. This band keeps growing, changing and evolving, so please stick with us for the next chapter of DBW as we move forward once again. We are already in the audition stages and we will have someone ready by our awesome Thanksgiving Eve show! Stay positive as we need everyone's support with this descison. Thank you so much!"