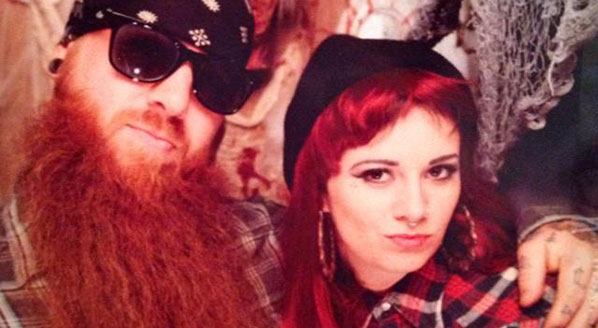 Black Tusk bassist Jonathan Athon and girlfriend Emily Boutwell
Jonathan Athon, bass player for Georgia band Black Tusk, is in critical condition following a Friday night motorcycle accident in downtown Savannah. Athon was riding a 1981 Harley Sportster, which crashed into the driver's side of an Acura SUV driven by an 85-year-old Savannah man. Athon was transported to Memorial University Medical Center after the crash. His passenger, Emily Boutwell, 26, was hospitalized, but not seriously injured. Yesterday, Black Tusk issued the following:
"Last night Athon and his girlfriend Emily were involved in a serious motorcycle accident. It's my understanding that a car ran a stop sign in front of them and they had no chance to avoid a collision. He is currently in the ICU, and the doctors have him in an induced coma to monitor his injuries. Emily is currently coherent and recovering in the hospital. The doctors are telling us that all we can do know is wait and see. We will post updates as they become available."
UPDATE: Athon has passed away.