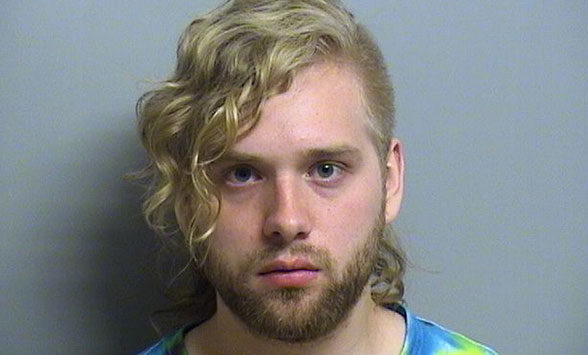 An hour ago, Miss Fortune revealed that they would no longer be taking part in their fall U.S. tour with The Word Alive et al. Here's what they had to say:
"Dear fans and friends alike, we are sad and sorry to announce that we will no longer be performing on the Get Real Tour with The Word Alive and others. Sometimes things are just out of our control. We love you all and hope we can see you again. We still encourage you to go out and see The Word Alive and the other bands on the tour."
Some thirty minutes later, their record label, Sumerian Records, announced that they had dropped the band:
"Sumerian Records has dropped Miss Fortune. We do not condone domestic violence, nor would we ever support an artist that does."
What went down? Apparently, Miss Fortune frontman Mikey Sawyer was arrested and jailed on October 24 in Tulsa, OK for domestic assault and battery (his mug shot can be seen above). His next court appearance is on November 4. The other members of the band have subsequently issued the following statement:
"We'd like to point out that the actions of one band member do not represent the actions and viewpoints of the entire band. Yes our singer Mikey is in jail, but no we DO NOT condone his actions. We DO NOT condone domestic abuse. If you've met anyone of us in person I'm sure you know we're a cool bunch of dudes. Saying Miss Fortune condones domestic abuse is a lie, so stop saying it. Thank you. "