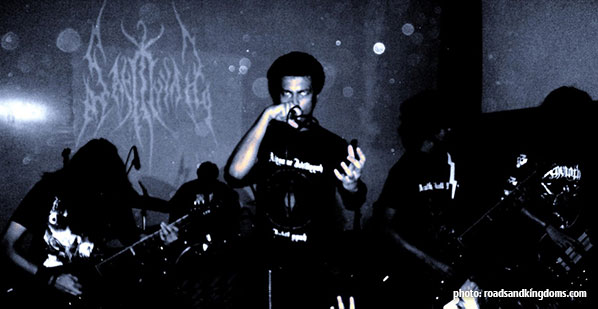 According to The Telegraph, a Bangladeshi man arrested as an ISIL (aka ISIS) volunteer to fight in Syria was a "death metal" singer who had a recording contract with a British music company. Asif Adnan, 26, was reportedly arrested in Bangladesh after he and an accomplice were recruited by Samiun Rahman, a 24-year-old London man, to travel to Syria to join Islamic State militants. The three men are now in custody on terror charges and could face life sentences if convicted. Here's what The Telegraph says about Adnan's music career:
According to their application, he has both "brilliant academic and cultural records", including a first-class degree in economics from the University of Dhaka and recording contracts in France and Britain for his 'death metal band 'Jahiliyyah', the name of the period of 'ignorance and barbarism' in Arabia before the arrival of the Prophet Muhammad and the Islamic faith. Asif Adnan's band was discovered by a British 'death metal' artist who runs a small niche music company, Kingslam Records, which gave them a contract for promotion and distribution rights to their music in the United Kingdom. He sings and plays guitar and bass on the band's tracks, which feature on Kingslam Records' website. Their style is loud and fast rather than melodic, and while the band's name indicates a serious interest in Islam, the creed followed by the Isil fighters he was alleged to be joining forbids music.