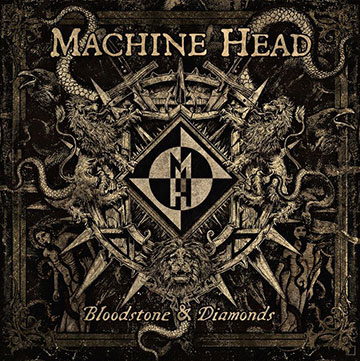 Regarding the title, Flynn had the following to say: "Bloodstone and diamonds represent two of the hardest materials on earth, it is also a lyric from the opening track of the album 'Now We Die'. In many cultures the bloodstone has been used as an amulet to protect against evil, and is the symbol of justice. Diamonds are the hardest natural material on Earth (which is how we feel about our music), and it also represents the diamond logo I drew 22 years ago (in my wife's apartment on Dover St. in Oakland) that has become the symbol for the band." Here is the track listing: 01. Now We Die 02. Killers & Kings 03. Ghosts Will Haunt My Bones 04. Night Of Long Knives 05. Sail Into The Black 06. Eyes Of The Dead 07. Beneath The Silt 08. In Comes The Flood 09. Damage Inside 10. Game Over 11. Imaginal Cells (instrumental) 12. Take Me Through The Fire A November release via Nuclear Blast Entertainment is expected.