Official press release: Death metal legends Obituary make their Relapse Records debut with Inked In Blood, their 9th full length LP. Almost three decades in, Inked In Blood stands out as one of the finest moments in Obituary's already godlike discography. Inked in Blood will be released October 28th in North America (UK/World October 27th and Germany/Benelux/Finland on October 24th). Today the artwork and track listing have been revealed. Pre-orders for Inked in Blood will be available soon. 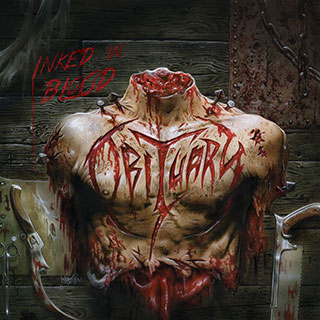 The riffs, groove, snarl and rage are as fierce as ever, putting most all other contemporary death metal bands to shame. Obituary are THE definitive death metal band, and Inked In Blood is an instant classic amongst their already storied catalog. Obituary are both the originators and the torchbearers of the genre! Inked In Blood is the sound of true death metal kings reclaiming their throne! The band is currently wrapping up a festival circuit in Europe and now Obituary have been confirmed as direct support for the upcoming "Death to All" Tour. The tour kicks off November 14th in Los Angeles, CA and runs through December 7th in Miami, FL. Inked in Blood track listing: 01. Centuries of Lies 02. Violent By Nature 03. Pain Inside 04. Visions in my Head 05. Back on Top 06. Violence 07. Inked in Blood 08. Deny You 09. Within a Dying Breed 10. Minds of the World 11. Out of Blood 12. Paralyzed With Fear