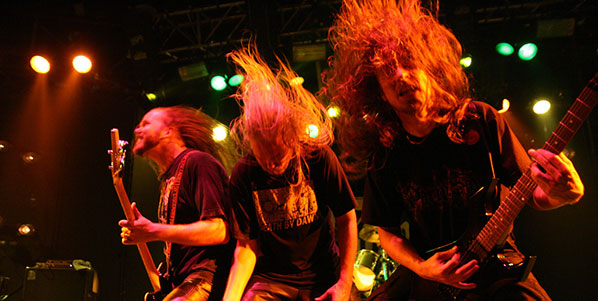 In a new case study published by The Lancet, doctors confirm what many have already surmised: headbanging to music can cause brain bleeding. The study detailed the case of a German metal fan who attended a Motorhead concert in late-2012 and later revealed that he had been headbanging throughout the show. After suffering from consistent, worsening headaches for several weeks following the show, he sought medical attention. Ultimately, a cranial CT scan showed right-sided chronic subdural haematoma, bleeding on the right side of the brain. Doctors cured the man by drilling a small hole in his skull to remove the blood clot. According to The Daily Beast, doctors concluded in the study that "headbanging, with its brisk forward and backward acceleration and deceleration forces, led to rupturing of bridging veins causing haemorrhage." Of course, headbanging is not only dangerous for one's brain; it can do damage to the neck and spine. Both Slayer frontman Tom Araya and Megadeth's Dave Mustaine have required surgery to combat the damage done by decades of vigorous headbanging. "We are not against headbanging," said Dr. Ariyan Pirayesh Islamian, one of the doctors who treated the German patient. "The risk of injury is very, very low. But I think if [he] had [gone] to a classical concert, this would not have happened." Despite the low risk, somebody should warn this guy right away.