Monday, June 23, 2014 5:59 AM PT / 10,878 views
Several bands are understandably ticked off following a weekend show in which the promoter is alleged to have disappeared without paying anyone. The Saturday show at the Dollhouse in Savannah, GA was dubbed "The Savannah Metal-Punx Birthday Bash" and featured eight bands, including Eyehategod, Ringworm, and Enabler. According to DoSavannah.com, promoter Floyd Lionel has "guaranteed a large sum of money for the headliners, Eyehategod, and Ringworm, as well as the other touring bands." Tickets for the show were sold for $25, however, Lionel apparently left with all the proceeds, failing to pay the bands and venue. Ringworm took to Facebook last night to complain:
"So, yeah, us, Enabler and Eyehategod got ripped off in Savannah, GA. The promoter, Floyd Lionel, left and didn't pay any of us. His email is [redacted] and phone is [redacted] (although it appears to be shut off)."
Both Eyehategod and Ringworm had signed contracts with Lionel and are now considering legal action. They may be forced to do some detective work though, as Lionel told DoSavannah in an interview last week "that this was his last big bash in Savannah before moving to New York." 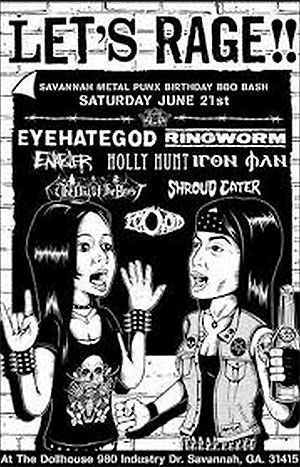 UPDATE: This morning promoter Floyd Lionel issued the following statement via Facebook:
"First apologies all around for Saturday not making excuses but I suffer from Social Anxiety Disorder (SAD) what you witnessed Saturday night was a person having a full blown mental breakdown due to a lot of undue stress from what was already a very long and stressful day, My departure was not based upon any attempt to avoid responsibilities or as some corners have said 'run off with band money.' But to prevent a situation that could have quite easily deteriorated into a far worse harmful situation for myself and others around me. Again apologies to all whom were directly adversely affected by my breakdown."
Ringworm says they've now been paid. Additionally, one of the opening bands, The Day Of The Beast, claims that they have been paid by Lionel via PayPal.