Two members of Flint, Michigan band King 810 were arrested yesterday for the critical beating of a man outside a Flint bar in October 2013. King 810 had been scheduled to perform at this year's Download Festival in the UK on June 15 and vocalist David Gunn and bassist Eugene Gill were arrested at the Detroit Metro Airport by the Michigan State Police Fugitive Team as they apparently prepared to travel overseas for the event. Gunn and Gill, both age 28, were arraigned today, June 13 on "assault with intent to do great bodily harm," according to authorities. A hearing for the pair is scheduled next week. UPDATE: King 810 has issued a statement regarding the arrests:
"We will not be performing at Download this weekend. Two of us were put behind bars in Flint, MI. on Thursday afternoon as we drove into Detroit Metro Airport for the flight to London. "Upon arrival the Michigan State Police Fugitive Team arrested David and Eugene and took them away in handcuffs. "At the time of this writing they remain in jail for an alleged assault from last year. "We apologize we cannot make it. We promise we will be there as soon as we possibly can." 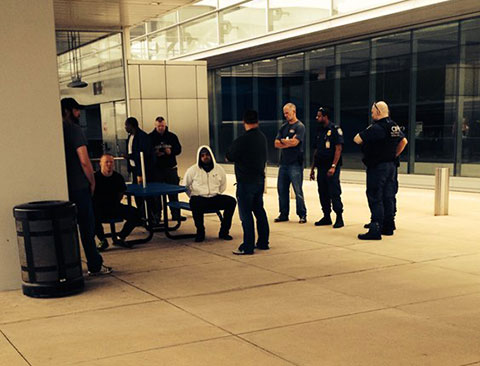