New York City hardcore veterans Madball have set Hardcore Lives as the title of their forthcoming album. The LP was engineered by Ken Susi (of Unearth) and mixed/mastered by Zeuss (Hatebreed, Whitechapel). An early-summer release is planned (June 27 in Europe). Frontman Freddy Cricien comments:
"I shouted 'Hardcore Lives' on Madball's first release, Ball Of Destruction, - I was twelve then. It wasn't pre planned or written down... it was an ad-lib that I just threw out there and we kept it! Back then there was no choice really, not the way we were recording - two track live at Don Fury's... NYHC style! I feel the sentiment behind the expression still holds true today, maybe even more so. Hence the reason we finally chose to use it as a title. Sure, it's about waving the flag for our genre/culture, etc. - I've always felt that 'we as a scene' had to scream just a lil louder... to be heard! That said, Hardcore Lives at least to us, is not just about a cool 'catchphrase' - it's about that rebellious spirit that doesn't give in... In life, music, whatever. It's about growing, evolving, and maintaining your integrity in the process. It's about family, overcoming adversity, and respect. All the things that matter inside and outside of the music realm. It's for everyone and anyone with an open mind and heart." 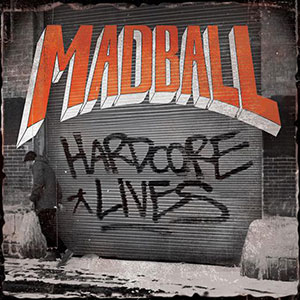